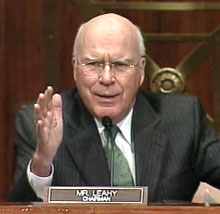 [(FRIDAY, Dec. 10) — U.S. Senator Patrick Leahy (D-Vt.) Friday said he has urged the Obama Administration to withhold funding to the central government of Haiti, and to suspend visas for travel to the United States by senior Haitian Government officials and their immediate family members, until necessary steps are taken to ensure a fair and democratic outcome to the elections held on November 28, 2010.

“As if Haiti did not have enough problems, now, once again, those in power there are trying to subvert the will of the people.  The United States must come down squarely in support of the Haitian people’s right to choose their leaders freely and fairly.  By suspending direct aid to the central government and visas for top officials and their immediate family members, the United States would be sending that message.  This process needs to bring about a legitimate government respected by the Haitian people and recognized by the international community.”