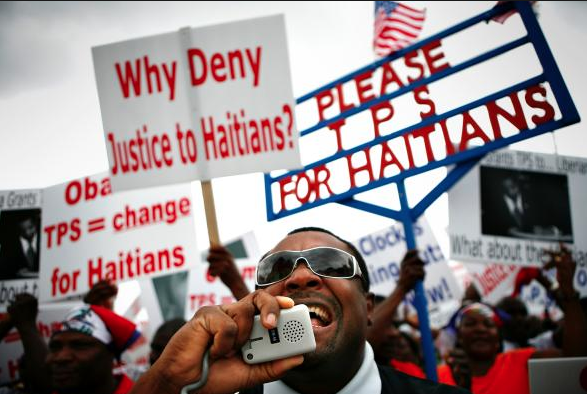 BOSTON — Some Massachusetts lawmakers and advocates are worried that American residents who once fled their unsafe home countries could soon be kicked out of this one.

The future of “Temporary Protected Status” for these residents is in jeopardy, putting at risk the futures of thousands of American residents — many of whom live in the Merrimack Valley, experts estimated.

TPS protects refugees of certain countries from deportation and gives them permits to work and live in America; El Salvador, Haiti and Honduras top the list of countries ravaged by war or a natural disaster and have the most TPS-eligible residents in America.

Sabyne Denaud, a Haitian-born immigration case specialist who works in Lowell, said she personally knows about 30 family members and close friends who came to Massachusetts for a new life seven years ago after an earthquake destroyed most of Haiti.

“The opportunity that they receive here regarding jobs and good schools – we don’t have that in Haiti. For them to go back to Haiti would be very devastating for them,” said Denaud, who works in refugee resettlement services for the International Institute of New England. “It’s really not a good solution for them because they’re just going to start all over again.”

If the Trump administration does not renew Haiti’s status on the list in the next several months, those immigrants would face a “death sentence,” Denaud said.

“Those granted TPS have been in our country for years, some even for decades,” said Rep. Adrian Madaro, D-East Boston, at a Statehouse presentation last week. “They own small businesses, they pay taxes, they’re valuable members of community. Many of their children are American citizens.”

Madaro and Rep. Christine Barber, D-Somerville, in conjunction with immigrants’ rights group Centro Presente, held an educational briefing for staffers and other lawmakers on how to communicate with constituents on TPS.

Barber said many people in her district and around Massachusetts who qualify for TPS and have lived here for years are anxious about the future of the program.

In May, John Kelly, then-Secretary of Homeland Security, extended protections for tens of thousands of Haitians until Jan. 22, 2018, but implied protections would end then.

“This six-month extension should allow Haitian TPS recipients living in the United States time to attain travel documents and make other necessary arrangements for their ultimate departure from the United States,” Kelly, now President Trump’s chief of staff, said in a statement in May.

An estimated 400,000 residents nationwide qualify for TPS, according to U.S. Citizenship and Immigration Services. The statistics broken down by state and city were not available, a CIS spokeswoman said.

Nesly Metayer, the director of a local youth and family nonprofit, said he knows of several Haitian families in Lowell who are protected under TPS, and is worried about what could happen to them if their status is not renewed.

“Lowell being one of the large Haitian communities,” Metayer said, “I really know that Lowell and Lawrence are going to be impacted.”

Metayer, the former chairman of the group Haitian-Americans United, said Lowell was once “totally revitalized by immigrants” who now play an important role in the community.

“Lowell is perfect case of where the immigrants are really revitalizing a city with their hard work and dedication to make it in America,” Metayer said.

Denaud said Haiti is still vulnerable due to the recent hurricanes that swept through the Caribbean.

TPS recipients “feel secured here and confident that they can build a decent life in the United States,” she said. “It is devastating to know that they can be sent back in a country where people are killed every day and [there is] no future for their children.”

At the Statehouse briefing, Centro Presente announced its intention to pass a legislative resolution in support of a TPS extension.

Speakers clarified that a TPS extension is up to the federal government.

“We believe it’s critically important that here on the state level, we’re advocating for an extension of TPS,” Madaro said. “This is something we granted to individuals because they needed a helping hand.”

Montes said action is needed now, since she is not optimistic the Trump administration will continue the program.

“You can see what the federal government is doing against people of color, against immigrants. It’s bad, it’s terrible,” she said. “They already eliminated DACA. In our opinion, TPS is next.”