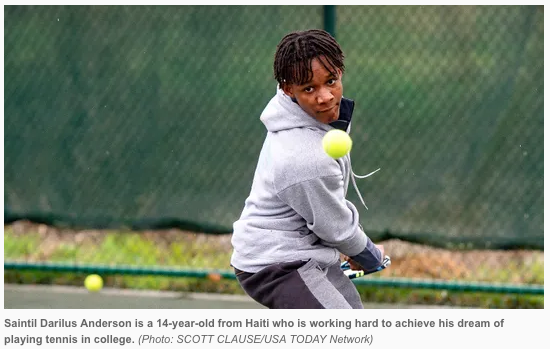 It’s late in a session of youth tennis lessons at Oakbourne Country Club, a bit past midday during the Mardi Gras holiday.

But, while all of the class members are enjoying themselves, one is positively gleeful at every chance to run, twist, turn, bounce and otherwise exert through the late agility drills.

In between sprints across the court, he is bouncing up and down, coiled and ready. Then he bursts up the hill at the end of the dash.

A shuttle run from point to point finds him back-pedaling instead of turning his back to the net.

In a third drill, his stride carries him effortlessly to strike points while others need more steps.

And yet, in many ways, he is still learning things some younger students already know about the game.

The young colt is Saintil Darilus Anderson, a 14-year-old from Haiti with a ready smile, soft manners, extraordinary tools waiting to be utilized and a burning desire to succeed in the game that has replaced soccer in his life.

“It is my dream to play college tennis,” said Saintil, whose chances to do that grew exponentially when he was taken in. “I love tennis more than soccer. It was a new game to me. In order to become No. 1, I had to choose which game to play.”

MORE: Pioneering black tennis players paved the way for many others

He is the adopted son of Josh Anderson and Megan Boudreaux, who met as missionaries in Haiti and also adopted sisters Jessica, 14, and Mika, 10. They recently added daughter Gabby to their family.

Saintil Darilus Anderson, 14, doesn’t limit his practice to classes at Oakbourne Country Club. He can also be found on the courts after school and in the early morning hours before school starts, sometimes as early as 5:30 a.m. (Photo: SCOTT CLAUSE/USA TODAY Network)

Each step along the way has been eye-opening for all involved.

“I went to my first Mardi Gras this year,” Saintil said. “I caught a ton of beads. We have Mardi Gras in Haiti, but it’s not nice as it is here. Some of the food is similar. We eat crawfish and lobster. I’m used to the spices used here.”

Saintil is currently in seventh grade at L.J. Alleman, and has been every bit as eager a student in the classroom as he is on the court.

“I like social studies,” he said. “I like the way they teach here. You don’t just memorize facts. We do more than that.”

That’s not to say there haven’t been some challenges.

“He’s had to build a vocabulary,” Anderson said. “But he’s an honor roll student here. His parents are deceased. We met him in 2012. Our pastor and partner said to come see this family. They were living in desperate poverty and he was not in school. He enrolled in our school when he was 9 years old, and went to the top of his class within a year.”

“It gives you a fresh perspective on education, on the relationship between teacher and student. Nothing is guaranteed. We home-schooled him in English. It has been exciting to see the mixture of the French and Creole culture.”

Hollinger was drawn to the teen by his drive to make a better life for himself despite humble beginnings.

“His perspective in life is hard to resist,” Hollinger said. “He’s always looking to improve. He has a humble spirit. Never takes anything for granted. And, you can tell he wants to be good.”

Like Saintil, Hollinger came to tennis late, at age 13. In his case, football and basketball were put aside when a growth disorder made it too painful to participate. Tennis became the outlet, and Hollinger became good enough to play No. 1 singles for the Ragin’ Cajuns.

“I would love that,” said Saintil, who will return to Haiti after this school year and return to Lafayette to attend high school locally. By then, he might be able to impress college programs to sign him.

“He’s raw, but he’s physically gifted,” Hollinger said. “He’s super fast. Needs to work on footwork and hand-eye coordination. He was a goalie in soccer. In soccer, you run from point A to point B, but in tennis you might run from A to C and back to D, then B. He’ll have to learn a lot of steps in short spaces, but it will come.

“Janusz is great with the kids. He’s a master technician and ball striker. I’m more of an ‘energy’ guy. There are no prima donnas in his classes. He makes it easy to teach. He has the genius to see things.

“I wanted to give back because a coach in Alabama did that for me at a critical time in my life.”

“Janusz has been fantastic,” he said. “It takes a lot of hard work and perseverance to go from soccer to tennis. We had a staff member in Haiti who introduced tennis to the kids and started a program.

Saintil is ready for any challenge.

“I know I have to be quick, have to be faster,” he said. “My volley has gotten better since I’ve been here. I need to make contact and control my feet. My dad and coach Janusz will help line up tournaments for me this summer.”

A big fan of Spanish left-hander Rafael Nadal, Saintil knows it will take many hours of work to dream of that level of play. It won’t be easy to play college tennis, for that matter, but when you’ve come this far from stifling poverty you have to keep hope alive.

And, hard work? Got that covered.

Saintil doesn’t limit his practice to classes with others at Oakbourne. He can also be found on the courts after school, as well as in the wee hours before school begins.

When asked if it was hard to get muscles moving at that hour, he said, “No, not for me. I want it.”

The freshness of being 14, and the power of a dream.