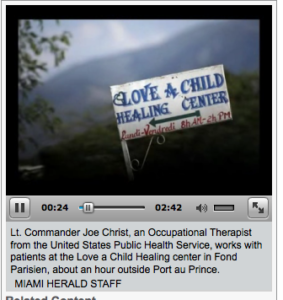 FOND PARISIEN, Haiti — In the turmoil that followed Haiti’s earthquake, Eugette Thimo waited with a broken foot for five days in a hospital yard littered with the dead.

The delay to see a doctor eventually cost her an infection, four surgeries and half her right leg.

“When I leave here, I will go sleep on the streets, because I do not have anywhere to go,” said Thimo, a 50-year-old former store clerk who is being treated at Love a Child Village, a makeshift clinic near the Dominican border run by Harvard University doctors. “When the international doctors leave here, I will die.”

Thimo’s grim outlook is shared by many international experts and fellow quake victims, who fear what the future holds for the tens of thousands of recovering patients dependent upon what one World Health Organization official calls “the worst healthcare system in the world.”

An estimated 300,000 people were hurt in the 7.0-magnitude earthquake that toppled Haiti’s capital last month, and up to 4,000 lost limbs. Haitian health officials acknowledge that in the chaotic first weeks, doctors failed to show up for work and hospitals were overwhelmed.

The World Health Organization said that up to 1,000 physicians from around the world descended on Haiti in the weeks that followed. Doctors Without Borders set up an inflatable hospital that is five times bigger than any other field infirmary the organization ever built. The University of Miami’s field hospital has already treated more than 2,000 people.

But as the quake dust settles and many exhausted surgeons leave for the comforts of home, it remains unclear what will become of the patients who have nowhere to go to recover — and not enough doctors to change their bandages or teach them to walk with one leg.

Haitian medical officials say the crisis will be the key opportunity to revamp a system so deteriorated that it will cost an estimated $150 million just to repair the University Hospital, Haiti’s largest medical facility.

Experts haven’t even begun to discuss the longer-term view in a nation that just lost both its medical and nursing schools. The nursing school collapsed, killing an entire class of 98 students and their teachers. The nation’s 600 medical students were spared: They were on strike and not in the building when it tumbled. Now they have nowhere to study.

“This is the largest amputee and crush wound population the world has ever seen. It’s unheralded,” said Harvard Medical School disaster management specialist Dr. Hilarie Cranmer, operations director at Love a Child clinic. “But you need a place to put them after you fix them. You can’t just throw amputees home. Where’s home?”

More than a million people lost their houses in the quake. About half of them are living in tent cities that sprouted around the capital with no running water or reliable food supply — and that’s exactly where many patients are winding up.

The fortunate, like Thimo, are being treated in tented post-op facilities.

“You don’t want to stick them in places where there is no food and water,” Cranmer said. “But that’s happening everywhere. Hospital beds are full of people who have nowhere to go.”

The International Red Cross has a social worker who spends part of the day at the University Hospital coaxing people to leave.

“We have been called by doctors who say, `This patient has to go and won’t leave,” said Ea Suzanne Akasha, a Red Cross psycho-social support volunteer. “One woman was admitted again and again, and there was nothing wrong with her. She just had nowhere to go. We had to get her to go: We needed the bed.”

University Hospital director Alex Lassegue said Haiti lost 19 doctors in the quake, three of them at his facility, where even surviving medics did not come back to work until 10 days later.

The surgery, pediatric, central lab and internal medicine clinics are damaged and unsafe. Doctors from around the world are operating under tents in the hospital yard.

“Our doctors had no gas to get to work and were tending to people in their own neighborhoods. We had to make a public appeal for doctors to come back, but that takes some time,” he said. “Now I have an ICU under a tent with all the equipment necessary.”

He said several units, including obstetrics and pediatrics, are being run by Haitian doctors, but Haiti is in dire need of more specialists and physical therapists to treat the growing number of amputees.

“We will need some revamping of the system,” he said. “We will take this opportunity to have another health system. There’s no way we can go back.”

University of Miami neurosurgeon Dr. Barth Green, whose organization Project Medishare launched the UM hospital, said Haiti is in desperate need of a critical care hospital and a rehabilitation center — or people will continue to die of infection.

“Haiti had a 50 percent post-surgery infection rate before the earthquake,” Green said.

UM’s clinic will shut down in a fews weeks because of funding, he said, although the organization received a $500,000 grant from the U.S. government to convert to a rehab center.

“We are going to run out of money, because the world is running out of interest,” Green said. “Everyone that went down there and gave press conferences got back on their planes and went home.”

Health Ministry Director General Thimothe Gabriel said national authorities are focusing their attention on preventing epidemics. With a half-million people living in camps, the health system fears an onslaught of typhoid and other water-borne diseases.

The health ministry is working with the World Health Organization to set up mobile clinics throughout the country to provide more care, he said.

The ministry is working on a plan to present to donors but has not yet come up with cost estimates, he said.

“We are capable of facing the challenge,” Gabriel said. “But we have to have partners.”

The World Health Organization’s Cristian Morales, who lives in Haiti trying to strengthen its healthcare system, said one of the reasons Haiti’s healthcare system is so poor is that so much aid poured into aid organizations, circumventing the health ministry.

“I have worked in several countries and can tell you that even before the earthquake, Haiti had the worst healthcare system in the world,” Morales said. “It was disarticulated and most inefficient. It’s the first country I know that has four healthcare players: the United States, Canada, Cuba and the churches.”

The next challenge, he said, is for the players to work together to address issues like the need for rehab centers. .

“We are working on an adequate post-operative care system and an efficient referral system as medical teams leave and others stay,” Morales said. “That’s quite a challenge.”

But the obstacles are countless. At a recent meeting, the head of the health ministry wanted to call doctors to work — but had no minutes left on his cellphone.

Many Haitian patients fear that the quake-battered nation simply does not have enough local doctors to address the mounting need. Asked where they would recover, both the patients huddled under bed sheets and those recovering in clean medical tents shrugged their shoulders.

“Some day, I guess all these doctors have to go home, but some other doctors will have to follow them,” said Junie Drouillard, 26, who broke both arms when her school in Port-au-Prince’s Canape Vert neighborhood collapsed on her. “Otherwise, everyone will die.”