It began as a simple question. Would the Smallholder Farmers Alliance (SFA)  like a gift of 4,000 pairs of shoes for our farmer members in Haiti?
The question had been posed by Timberland, our long-time sponsor and soon-to-be client (when we begin to grow cotton again in Haiti after a 30 year hiatus). But the offer was not for Timberland footwear, but rather shoes made by Vans. Both companies are owned by the VF Corporation and have factories near each other in the neighboring Dominican Republic. Sun Jade International, the factory that manufactures Vans shoes, worked closely with Timberland to facilitate the donation.

The logistical challenges involved in transporting the donation were not simple, but the gift did indeed finally get to Haiti. And over the course of June, the shoes were distributed to farmers affiliated with the SFA in Gonaives, St. Michel de l’Attalaye, Terre des Negres, Medor and Laborde.

“We are very happy to get seed and tools from the Smallholder Farmers Alliance,” said one woman farmer in Laborde (shown left) as she modeled her new shoes, “but it was a great surprise to receive these beautiful shoes. We lost so much in Hurricane Matthew and this makes a big difference.”
It should be noted that the SFA operation in Laborde is a special project, sponsored by Project Medishare, in which 800 farm families are being helped to recover following the devastation caused by Hurricane Matthew last October.

“The gift of these shoes from Vans, made with Timberland’s help,” said Timote Georges, Executive Director of the SFA, “was the cause of great excitement among our farmers for two reasons. First, they were very grateful for the shoes themselves. But equally important was the signal to the farmers that they have not been forgotten.” 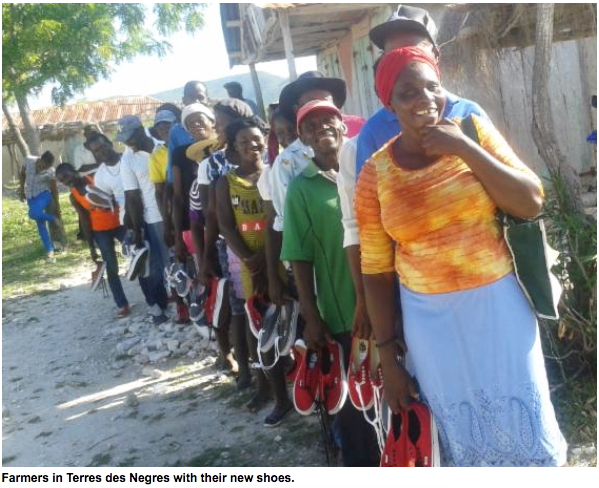