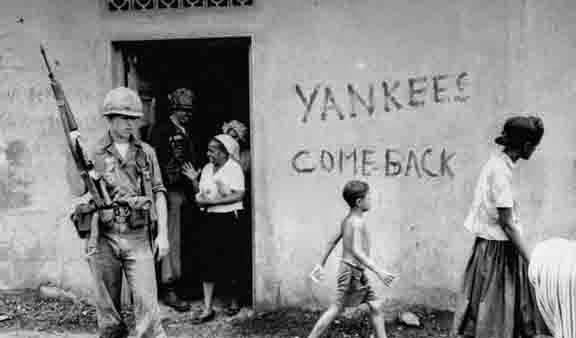 I am listening to Evans Paul talk a lot of negative garbage, involving the 1915 – 1934 American occupation of Haiti.

Evans Paul speaks of the humiliation involved with the occupation.

He has some experience since Evans Paul was effectively responsible for the 2nd occupation, in 1994, brought about by, and because of the aftermath of Aristide’s presidency. Paul was the one who put the mob on the street, at 11 AM election day, in 1990, effectively handing the presidency to Aristide, without a ballot count.
Polls would have closed at 7 P.M.

Aristide received a massive 67% of the 300,000 votes cast in a demonstration of democracy in action.

While I do not support the concept of the 1915 occupation one must accept the fact that, when the Americans departed, in 1934,  Douane worked, taxes were being collected, we had a functioning central bank and health system, transportation elements, including a rail and tram system, public works, and schools.  We also had an army which became a key element in Haiti’s infrastructure.

Now all of that is gone.

We don’t even have the General Hospital, as a useful, functioning entity.

Douane is a criminal enterprise.

The Central Bank is a mafia stronghold.

In places one can find a few left-over railway tracks.

There was a pneumatic railway, from downtown Port-au-Prince to Petionville. All that remains of this are a few discolored photos and dim memories in the memories of old folks.

And the Forces Armees d’Haiti has been destroyed.

One can fault the American occupation but, humiliation was accompanied by positive progress.

Now we face our own Martelly generated humiliation, with an accelerating slide into the abyss.  Nothing positive, only an accelerating negativity, with growing violence.

Pwomis se Det was Martelly’s motto but this was an empty phrase. Martelly is the one who has brought true humiliation to the Haitian people who trusted him.

He has destroyed what existed, and has stolen the hope of Haiti’s Ti Moun by allowing his Minister of Education to plunder the treasury, taking millions to be distributed among Martelly insiders.

And Evans Paul is Martelly’s instrument of enforcement as people face starvation within our borders.

It is Evans Paul’s second opportunity to destroy the nation.

Perhaps he will succeed this time.