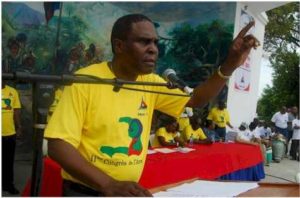 Jean Henry Ceant leads Group of 12 march in protest of continued electoral farce. The march moved down Delmas, ending in front of the badly damaged National Palace, gathering people as it moved.

The international community, and its band of experts, are endeavoring to force a completely and totally flawed electoral process upon the Haitian people.

The OAS suggestion is only slightly less criminal than the original concept created by President Preval.

Preval, and his close friend, Reginal Boulos, created a series of polls to show that Manigat was the leader in popularity when, in fact, she could control no more than 5% of the population. Same goes for Jude Celestin. Preval was/is trying to put someone in office that will be easily controlled.

If a real poll was carried out, it would show that the three leaders are Ceant, Baker and Martelly…..with  Celestin and Manigat near the bottom.

The only solution – to avoid future melt-down – is a complete and total annulations of the  November 28, 2010 ballot.

A new CEP must be named.

A real election – that reflects the true desires of the Haitian masses – must be funded and supervised.

Only then will stability be a real possibility.