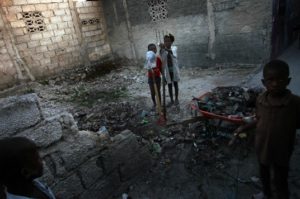 Tent camps dot the streets in Port-au-Prince, Haiti. The shelters, sometimes just draped tarps, are all that stand between residents and Mother Nature.

More than 400,000 of those residents live in the tents, all they’ve called home since a 7.0-magnitude earthquake rocked the Haitian capital in 2010, reducing many of of the structures in the capital and its suburbs to rubble.

Two years removed from the earthquake, Haitians are praying again. This time, they hope they will be spared Tropical Storm Isaac, which appears to be headed straight for them.

The country is still trying to battle back from a deadly cholera outbreak after the 2010 earthquake. So as the storm threatens to bring winds of about 74 mph and 12 inches of rain, the challenges are mounting. The U.S. National Hurricane Center warned that the rain could cause life-threatening flash floods and mudslides.

Aid organizations are preparing for the worst.

“We watch those storms every single time they come near because Haiti is so vulnerable,” said Amy Parodi, a spokeswoman for the Christian humanitarian organization World Vision.

The agency has met with the government in previous summers to discuss contingency plans for major storms, and pre-positioned relief items are available, she said.

Haiti has always been a susceptible to hurricanes, even before the earthquake. It is right in the middle of “hurricane alley” in the Caribbean.

When hurricanes dump rain on the slopes of its deforested mountains – some more than 8,000 feet high – mudslides are the result. Living at the base of these mountains, in tents and poorly constructed houses, are hundreds of thousands of people.

“Our experience in Haiti clearly indicates that it is not the storm or the winds, it’s the rain that causes the problems,” said Sinan Al-Najjar, the Red Cross’ deputy country representative in Haiti. “When rain comes, landslides and flash floods do happen in Haiti. We are trying to focus on which are the flood areas, which are the risk areas.”

With flood waters come the risk of another outbreak of cholera, an infection of the large intestine that causes severe diarrhea.

“After floods, it’s going to be almost certain that we see increases in cholera cases,” Al-Najjar said. “We already witnessed that with the few weeks of rain we had in April. We had spikes due to daily rain. If a flood comes, we know certainly cholera is going to be an issue.”

Al-Najjar said there are workers on standby in the area prepared to deliver any necessary medical attention, including supplies for more than 15,000 people who may present symptoms of cholera. He added that they are also prepared to purify more than 800,000 gallons of water. The Red Cross has teams on standby to help distribute any aid that may be necessary and warehouse facilities as stocked as they can be.

Haiti’s cholera outbreak in October 2010 killed more than 7,000 people and sickened more than 500,000, according to Nigel Fisher, the United Nations’ humanitarian coordinator in Haiti.

In March, Fisher warned that the existing camps would probably be “exposed to cholera outbreaks and risks of flooding that will be exacerbated by the upcoming rainy and hurricane season from May to November.”

Even if the decision to evacuate these vulnerable areas happens, Al-Najjar said, a large problem is the lack of evacuation centers in Haiti.

Which means many Haitians may have nowhere to go as the storm moves ashore.

“A lot of people don’t have safe houses,” Al-Najjar said. “And they are going to certainly need help in case of heavy rains or strong winds. There is a lack of evacuation places and lack of shelters. That’s something we’re going to have to deal with.”