WASHINGTON/GONAIVES, HAITI – “Down with Jovenel! Down with Jovenel!” a group of PetroChallengers shouted Friday in Gonaives, a lush, port city 142 kilometers (88 miles) north of the capital, Port-au-Prince.

Anti-corruption activists, millennials, students and media-savvy young professionals are demanding President Jovenel Moise and members of his government, who are accused of fraud and mismanagement of funds, be brought to justice. The president has denied the allegations and rejects calls for his resignation.

The #PetroCaribe protests have swept Haiti’s sixth-largest city since Sunday, echoing those in the capital. Gonaives is known as the city of Independence, because it is there that the leader of the revolution and the nation’s first ruler, Jean-Jacques Dessalines, declared Haiti’s independence from France on Jan. 1, 1804. 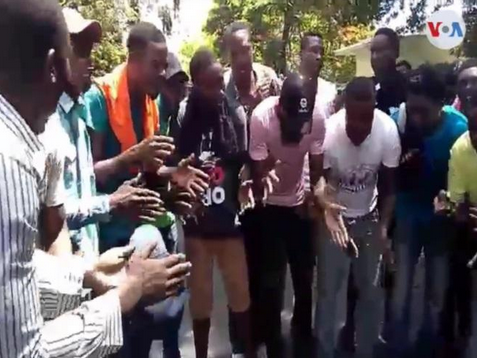 PetroChallenger anti-corruption protesters chant “Down with Jovenel” during a demonstration against President Jovenel Moise in Gonaïves, Haiti, June 14, 2019.

Protesters burned tires, blocked roads, threw trash in the streets and participated in special voodoo ceremonies Friday to show their displeasure with the current political and economic situation.

“The country can’t live like this anymore. We’ve suffered too much. Jovenel must leave power and be judged for his crimes,” a man in his 20s told VOA Creole. He said they would stay in the streets until the president resigns.

“The president, his wife and kids, former president [Michel] Martelly — they made themselves and their friends millionaires, but we the poor, we were left with nothing,” he said. 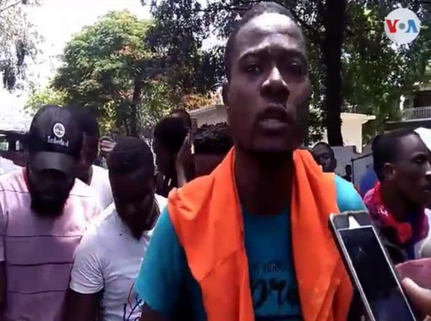 A protester in his 20s says he will stay in the streets until President Jovenel Moise resigns, in Gonaïves, Haiti, June 14, 2019.

Moise is accused of fraudulently benefiting from funds generated by the PetroCaribe oil alliance with Venezuela.

The allegations were made in an official report handed to Haiti’s Senate on May 31. Haiti’s Superior Court of Accounts and Administrative Litigation (Cour Superieure de Comptes et du Contentieux Administratif), a nonpartisan institution tasked with overseeing the government’s budget, spending and allocation of funds, prepared the report detailing irregularities and alleged abuse of funds generated under the PetroCaribe agreement. The $3.8 billion in oil revenue that went missing had been earmarked for infrastructure projects, education and social programs. 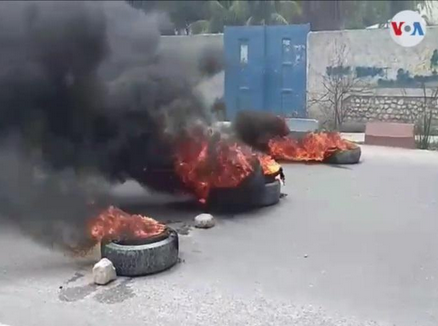 “Your president, the one you voted for, is not corrupt. Your president will never be involved in corruption,” Moise said in a national address Wednesday, his first public comment since nationwide protests began Sunday.

“The justice system must do its job, investigate. Those who stole and mismanaged government funds will be held accountable,” the president said. “The legal process will be fair and free of political bias.”

He ended the speech with a warning: “I will not allow anyone to spread chaos and desolation in the country under any circumstances.” 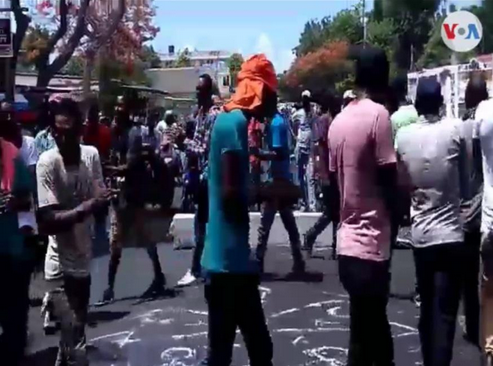 But the speech failed to calm an angry nation or the PetroChallengers, who are determined to speak truth to power and change the way their country is run.

“Jovenel has to know we understand what he’s doing. We are students, we went to school. We want the people to open their eyes and see what Jovenel is doing to them. He has already proven it. Although there’s a climate of insecurity, he has been unscathed. People are dying of hunger but he is fine,” a protester said.

The week of protests have shut down government offices such as customs, the internal revenue service, businesses and schools. 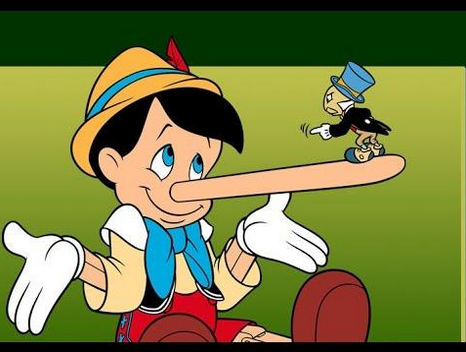 This most recent outrage from VOA. It has earned a perfect 10 out of 10 Pinocchio’s on our rating system.

This VOA coverage of Haiti is so unprofessionally biased that many cynical Haitians believe money must have changed hands.

Haiti has many cynics in Gonaives and elsewhere

I would never suggest this.

However, the descriptions of actual events are so far from the truth that one is left with few alternatives.

The reporters were not actually on site, perhaps not even in Haiti.

They are generating unfortunately biased and inaccurate, damaging  information because they are Haitians, with an anti-government basis and VOA has an anti-Haitian government bias.

Or, they are criminally incompetent and should not be allowed to functions as journalists.

Many cry out for FREEDOM OF THE PRESS.

Haiti must cry out for RESPONSIBILITY OF THE PRESS!

Haiti has more FREEDOM OF THE PRESS, actually IRRESPONSIBILITY OF THE PRESS  than anywhere else I can think of since the legal system is so disorganized that litigation against lying journalists is not possible here. Whereas the threat of legal action within the American judicial system, places a certain governor on the press’s tendencies to exaggerate.

In America, an Editor would throw this article in the garbage and suggest the writers join the staff of McDonalds or Burger King.

No matter what the facts in support of this generation of fiction may be, it is unfortunate for the simple fact that people believe VOA is the “Voice of America’s Government.”

Why is the VOA reporting in a manner that is contradictory, and out of step with  the official State Department policy?

Before I go any further, I have included a photo of a real, motivated Haitian crowd. This is what happens when Haitians are really involved with something. Such crowds were exponentially larger than the one in this illustration, during the 2004 demonstrations demanding the removal of Aristide. 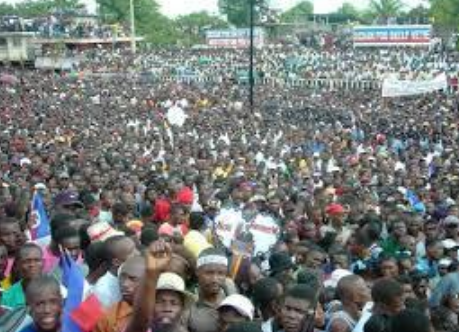 More than 300,000 marched, on a regular basis, until they eventually saw him take exile in South Africa. The  truth of this scenario was never reported accurately by VOA, because it is heavily LAVALAS in orientation, so why should we expect honesty now?

This photo shows a political rally is support of Jovenel Moise.

Perhaps there is a lesson here!

You have read the  complete VOA article, with their photographs so you can now understand my viewpoint.

The photo at the top of the VOA article has a couple dozen people, including motorcycle traffic. The people are casual, in their appearance, and have cluttered the street with some junk, not much, but enough to be an irritant.  If this is the size, and energy of the demonstration it provides proof of the article’s biased reporting of a non-event.

Those in the photo are very casual.

They don’t show QUOTE:Anti-corruption activists, millennials, students and media-savvy young professionals….UNQUOTE I don’t see any of those illustrated in the VOA article, although this phrase appears in other articles, written by the same people. I guess they are using what they consider to be today’s “buzz words.”

Trust me! If thousands marched, these turkeys would have a real photo at the top of their article. Count the guys yourself. Enlarge the photo and use the fingers on both hands. You won’t need many more. 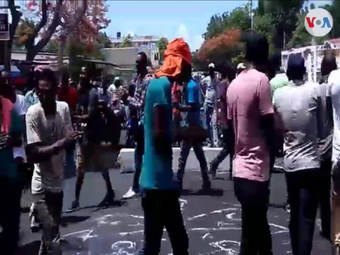 The only other photo, with people in it, is this one and take your time to enlarge and count heads. There isn’t even 3 dozen people here. Hardly a massive part of a massive demonstration against the Jovenel Moise government.

The article is heavy on made up “rhetoric” as imaginary people speak out against the Jovenel Moise government.

The VOA article leaves one to believe that the Jovenel Moise government had something to do with PETROCARIBE when, in fact, the program ended before Jovenel took office.

The VOA article doesn’t mention the original, and major thief of PETROCARIBE funding, Rene Preval, who took some $198,000,000, or the Senate and Chamber of Deputies, who have not accounted for some $100,000,000,and the list goes on, including members of the Superior Court of Accounts and Administrative Litigation – authors of the report!!.

Jovenel Moise had a couple of small contracts, to fund construction of roads where he lived. Unlike many projects, funded by PETROCARIBE, these road projects were completed at a lower price, and better quality,  than those provided by previous contractors, Vorbe in particular. The quality, low cost and professional completion of these road projects garnered many votes during the Presidential elections.

Our VOA reporters regurgitate lies that were disproved the day after publication of the Superior Court of Accounts and Administrative Litigation (Cour Superieure de Comptes et du Contentieux Administratif) report,

Shame on you Sandra Lemaire and Exalus Margenat, if your mother is a patriotic Haitian, she will  be ashamed of you as she goes on to read your article I have included below.

Your family might even ask you to change your names.

VOA should have a polygraph machine hooked to their reporters as they file such nonsense. It would be laughable were it not for the fact that the Nation, and its people will suffer because of articles like this VOA trash.

Kids’ schooling, and the lives of Haitians have been disrupted by dishonest journalism such as the material generated by VOA and certain other media outlet.

These guys never mentioned the fact that the heavily promoted and financed June 9 nationwide demonstration, expected to draw 300,000 in Port-au-Prince, 100,000 in Cap Haitien, 50,000 in Gonaives….and so on… didn’t draw a total of 10,000 nationwide.

An indicator of the population’s mood.

Now, the organizers have moved from PEACEFUL to DESTRUCTIVE wanting people to destroy Haiti tomorrow.

So much for Patriotism.

Perhaps this VOA team is practicing for a move into the upper echelons  of fictional journalism, perhaps to the NOUVELLISTE where a good piece of politically supportive fiction can sometimes commend $20,000 to $30,000 American.

Those are the big leagues, attained by few.