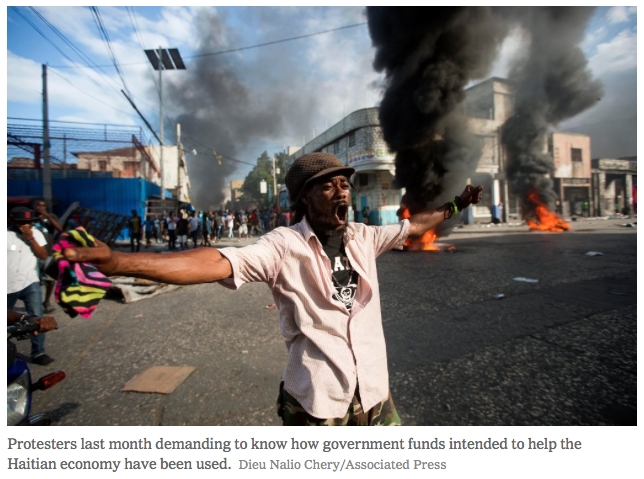 For months, an anti-corruption movement has been growing, aided by social media and peaceful street protests. But tensions are rising as the government turns to repression.

Mr. Johnston is writing a book about Haiti and international policy toward it since the 2010 earthquake.

PORT-AU-PRINCE, Haiti — It started with a few keystrokes in a living room in Montreal. Gilbert Mirambeau Jr., a Haitian filmmaker and writer, took to Twitter on Aug. 14 to post a photo of himself, blindfolded, holding a piece of cardboard with a simple question written on it in Haiti’s Creole: “Kot Kòb Petwo Karibe a???” — Where is the Petrocaribe money???

He was referring to funds that had gone missing from some $2 billion in low-interest loans provided by Petrocaribe, a Venezuela-led oil-purchasing alliance of Caribbean states, since 2008 to help Haiti’s economy. It became a critical emergency resource in 2010, when an earthquake devastated the country.

A few days after the Mirambeau tweet, the popular Haitian rapper K-Lib tweeted his own picture, using the hashtag #PetroCaribeChallenge. On the 18th, an informal group of young Haitians who organized on Twitter and Facebook decided to make promoting the hashtag their first public action. The movement continues to build momentum and the campaign has hit Haitian streets.

On Oct. 17, huge crowds of Haitians from all sectors of society peacefully demonstrated with banners and shirts demanding an answer to Mr. Mirambeau’s tweeted question, which is still trending.

The result has been a remarkable challenge to the legacy of corruption and misgovernment that Haitians share and have felt powerless to effectively counter for many decades. The big question for this tiny, impoverished country has become whether the current movement will push the political scene toward functional democracy or drive the government into a new cycle of repression.

On Nov. 18, a day commemorating Haiti’s victory over Napoleon’s troops 215 years ago, citizens again hit the pavement, signaling that this movement will not go away.

But ensuring that this momentum leads to significant change will require all interested parties — Haiti’s government and business, its elite and the impoverished masses, along with the international community — to unite in the fight against corruption, the transactional status quo that extends beyond the nation’s borders.

After the 2010 earthquake here, foreign donors pledged more than $10 billion in aid. But less than 1 percent of the emergency aid spent in their names went directly to Haitians. The legitimate government, the private sector and civil society were cast aside in favor of for-profit aid companies in the United States and other foreign experts. It is a policy that evokes the dynastic Duvalier dictatorship in the mid-20th century, when “Papa Doc” and “Baby Doc” became international symbols of kleptocracy. Today it is a policy that has only served to weaken the state and perpetuate the corruption, this time on an international scale.

Seemingly in contrast at first, Petrocaribe put funds directly into government coffers, allowing the government to fill wide gaps left by the earthquake. But rather than helping develop a more effective aid regimen, the infusion wound up delivering a highly efficient patronage system. Nine years after the earthquake, there is still little to show for the billions received.

Last year, a Haitian Senate commission published a 650-pageinvestigative report on the Petrocaribe program. It implicated much of Haiti’s political class in inflating government contracts, funneling money to ghost companies and a host of other financial improprieties.

And now, after the $2 billion scandal languished for a year in the hands of politicians, and with Haiti’s judiciary too weak to act, Haitians on their island and living abroad took it into their own hands.

The movement itself is improbable. It has no clear political leader. Yet more than half of the Haitian population is younger than 24, and by focusing on social media, the ever-growing diaspora is becoming more active in its country’s political future.

Unfortunately, tensions are rising as change begins to appear possible. Last July, three days of riots followed a gasoline price hike, revealing how close the nation is to a social explosion. Then came Mr. Mirambeau’s #PetroCaribeChallenge, shifting the paradigm to a nonviolent campaign. Still, armed gangs close to the ruling party, together with corrupt police officers, massacred at least 60 people just days before the Nov. 18 protest.

In Haiti, stability has often been cited as a reason not to challenge misgovernment, but the events of last summer and fall revealed that continuing the status quo will only generate more instability.

Nonviolent protest that puts pressure on officials to promote accountability would seem to be an obvious path out of that conundrum, but recent history does not point to much hope for significant change. For example, the government has urged patience and promised an investigation. But Haitians have heard empty promises before. After the Duvalier dictatorship fell, not one official was convicted of a financial crime.

In February 2017, when Jovenel Moïse became president, he pledged a crackdown on corruption. But his political mentor and presidential predecessor, Michel Martelly, had presided over most of the Petrocaribe spending. Now Mr. Moïse too has been directly implicated, and his government’s repression has picked up.

With the repression only making the opposition more determined, prominent political and business figures clearly sense a moment of opportunity. Whether it is to pursue justice or to protect their own interests is an open question. Either way, an investigation will be hard put to avoid being sucked into the political swordplay in Haiti’s capital.

How then to ensure that this movement is not thwarted by greed or power plays? A clue may lie in Guatemala, where an International Commission Against Impunity backed by the United Nations is investigating the role played by that country’s entrenched elite in its morally repugnant grip on the economy and government. The commission is currently under threat, but its ability to survive for over 10 years has at least opened a door to a long process of change.

One problem is that the U.N.’s recent history in Haiti includes years of refusal to accept responsibility for a peacekeeping mission’s introduction of a deadly cholera epidemic. A new U.N. mission arrived in 2016, but it appears feckless in the fight against impunity. After it welcomed the assignment of an investigative judge to the Petrocaribe case this year, Haiti’s government protested, and the U.N. quietly replaced the mission’s director.

Another barrier is that any deep international role in a reformation would be difficult to accept in a nation with a long history of foreign intervention. Still, the universal principles — investigative independence, expertise and legal empowerment — that have guided the Guatemala commission may provide a useful road map for Haiti’s anticorruption movement. It would be hard to argue against the need for experienced forensic auditors, courageous prosecutors and legally empowered professionals with a mandate to follow money wherever it may lead.

For the international community, whose interventions and misplaced priorities have long helped consolidate the unsustainable status quo, standing up for transparency this time could re-establish some trust with the Haitian people and keep open a path to systemic change.

It is up to all of Haiti’s interested parties to follow that path. “I was not expecting all this,” Mr. Mirambeau, whose tweet started it all, told me. Nobody was. But for now, it is this possibility of change that has brought a modicum of hope to Haitians across the world.

Neat article but the reality is different.

Street demonstrations were not spontaneous. They were funded by interested, involved groups. The Potentates of Power- Sogenor, Haytrac, and E-Power spent money to draw attention from their own rape of the economy. Other business interests used the demonstrations to attack competitors.

Once the payments stopped, the marches ended.

We now see a switch to home invasions and drive-by shootings to create and maintain chaos.

Those who stole from PetroCaribe will never be sanctioned.

Bad comparison. Under Duvalier there was infrastructure, investment, law-and-order plus Hope.

There is little optimism or Hope on the streets today.