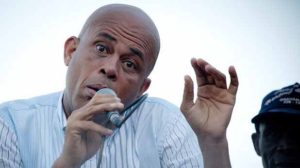 An international commission met with Haitian officials to try to find a solution to the crisis caused by the presidential election.

By TRENTON DANIEL AND JACQUELINE CHARLES

SANTO DOMINGO — Members of the Interim Haiti Reconstruction Commission met in the neighboring Dominican Republic Tuesday as Haitian officials and the international community searched for a way to break an impasse over the country’s flawed presidential election.

It was the third straight day of calm in Port-au-Prince ; A marked contrast to last week when backers of popular singer Michel “Sweet Micky” Martelly and anti-government demonstrators paralyzed the capital with barricades and fires to protest preliminary election results that showed Martelly had been edged out of a runoff by Jude Célestin, Haitian President René Préval’s protegé.

Martelly proposed his own solution Tuesday: Form a new elections council and hold a new election in January in which all 17 candidates could participate. The candidate getting the most votes in that election should win the presidency, he said.

“It’s only like that that I can believe things can recover, that I can have confidence with the retabulation, that the country can reclaim confidence in the electoral process,” Martelly said.

Préval, meanwhile, called on the Organization of American States to provide technical experts to help with both the legal challenges to the vote and a review of the tally sheets. The United States and others hope that will lead to a vote recount.

At this point candidates have until Wednesday to file appeals with the electoral council, and the final results, which could lead to a runoff, are scheduled to be released Dec. 20.

The election crisis comes one month before the one-year anniversary of the devastating quake that hit Haiti and in the midst of a cholera epidemic.

“We are all dedicated to the recovery. This important work rises above the politic of the day,” said Haitian Prime Minister Jean-Max Bellerive, co-chair of the reconstruction commission along with former U.S. President Bill Clinton.

Most of the meeting focused on the slow pace of the recovery from the earthquake, which left 300,000 dead — by Haitian government estimates — and more than 1 million living in tents and under tarps.

A dozen Haitian commission members signed a letter that aired their frustrations with the recovery process. “The Haitian members don’t even know the names of the firms that are working for the [commission] and what they are doing,” said Suze Filippine, who represents Préval on the commission. “We are just figure heads to rubber stamp decisions when they are taken by the commission.”

The group’s volley came after former Jamaica Prime Minister P.J. Patterson lobbed a criticism of his own. “This thing requires a level of urgency. The people of Haiti can’t wait indefinitely to see something meaningful and tangible in respect to the removal of the rubble . . . people should not be able to live in that situation nearly one year after the earthquake.”

Clinton acknowledged the concerns saying that it’s important for the people of Haiti to see “tangible progress” and reconstruction as a reality not a dream. He said the commission had already approved $2.6 billion in projects to help 1 million Haitians, and had hoped to approve another $500 million by Tuesday evening.