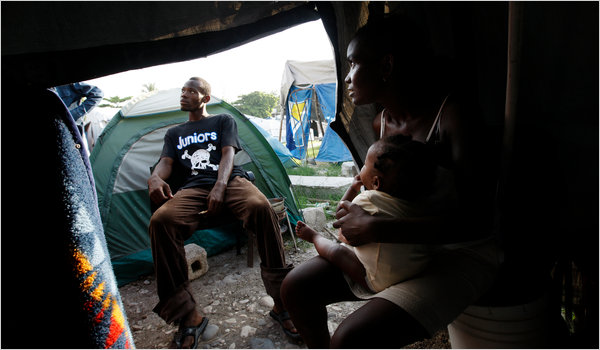 Louise Romelus, the wife of the leader of the Palais de l’Art camp, with her daughter in June. Humanitarian efforts there helped delay evictions after a conflict arose between the property owner and the camp leader. More Photos »

PORT-AU-PRINCE, Haiti — As tent camps go, the one on the 28-acre Church of God property overlooking the Valley of Bourdon is almost bucolic, with hundreds of canvas-draped shelters under leafy shade trees and a cohesiveness among residents. But panic is building there.

The Church of God is planning to evict the encampment in the near future. While the church relented on a Sept. 30 deadline under pressure from humanitarian officials, it still wants its Haitian headquarters rid of a population that church officials have come to see as a freeloading nuisance.

“This used to be a beautiful place, but these people are tearing up the property,” said Jim Hudson, a Church of God missionary living at the site. “They’re urinating on it. They’re bathing out in public. They’re stealing electricity. And they don’t work. They sit around all day, waiting for handouts.”

Almost nine months after the earthquake that devastated Haiti, eviction threats have increased markedly and have become an urgent humanitarian concern, international groups say. Some 144,175 individuals have been subject to threats of eviction since March, and 28,065 have been actually evicted, according to data collected by shelter experts here.

Humanitarian officials have asked the government to consider a moratorium on evictions and to address the issue publicly, urging compassion. They worry that the evictions could increase conflict, lead to the mushrooming of smaller sites without services and force people into locations that are unsafe.

“It’s a huge problem that could exacerbate lots of other problems,” said Lilianne Fan, the housing, land and property coordinator for the multiagency shelter cluster. “The bottom line is that the vulnerable become more vulnerable, and you get into a situation of continual displacement without a long-term solution.”

Many landowners, fearing that the tent cities will become entrenched slums, say that they need to reclaim their properties sooner rather than later for their intended uses.

Their eviction practices vary, from sudden and violent to mediated and planned. In some cases, landowners have sent thugs to slash or burn tents; in others they have offered cash payoffs to expedite expulsions.

But whatever the method, the evictions increase the instability of the displaced population for whom few alternatives exist, given the slow pace of the cleanup and reconstruction effort.

Humanitarian officials are working with the government to develop a comprehensive strategy for handling camp closings based on the now scattershot efforts to help people clean up and move back into their neighborhoods.

At the same time, they are mediating these tense situations case by case, seeking to buy time from landowners while they look for solutions for each family. Sometimes an inducement works — for example, the construction of permanent latrines on a property. Other times, a multipronged approach is needed — negotiations, cash and peacekeeping troops.

That was the case at the Palais de l’Art compound in the Delmas municipality this summer after a conflict between the landowner and a leader of the tent camp there built to a peak with mutual threats and reports to the police.

The owner, Joseph St. Fort, said hundreds of families had fled to his land on the day of the earthquake: “I said to myself right then, ‘Uh-oh. You’re in trouble.’ I started feeling panic because I knew it would be very difficult to get rid of them.”

Before the earthquake, Mr. St. Fort had rented out his large property for events. After, he himself moved into a tent inside the compound with the other displaced people. But by March, it was time to restart his business, he said, so he wrote the first of many letters to the government.

“Mr. Minister,” he wrote to the interior minister, “the leadership of the Palais has to notify you that we will be obliged to evict the 320 families who have occupied this terrain since Jan. 12. The leadership regrets that it will not have the assistance of state authorities in evacuating the disaster victims.”

The minister, writing back, requested Mr. St. Fort’s patience — “knowing you are aware of the risks to public security of a premature expulsion.”

Mr. St. Fort waited months, but tensions built with camp residents, who knew he wanted them gone, and especially with one man, a camp leader. In June, Mr. St. Fort ordered the man to leave, and the man refused. So Mr. St. Fort cut off water and sanitation services for the camp and locked the gates, shutting in — or out — the hundreds living there, including amputees and elderly people.

“We feel like prisoners,” Jean Robenson, 17, said at the time as he tended to his grandmother in her wheelchair.

For weeks, AMI, a Portuguese humanitarian group, struggled to mediate. Finally, with the help of Haitian officials, the International Organization for Migration and United Nations troops, they persuaded Mr. St. Fort to let the tent camp remain if the leader was escorted to another site. In a tense meeting, a Haitian humanitarian official urged the camp residents to reject the leader, Reynald.

“Raise your hand if you don’t want Reynald,” the official said.

The crisis was averted, or deferred. 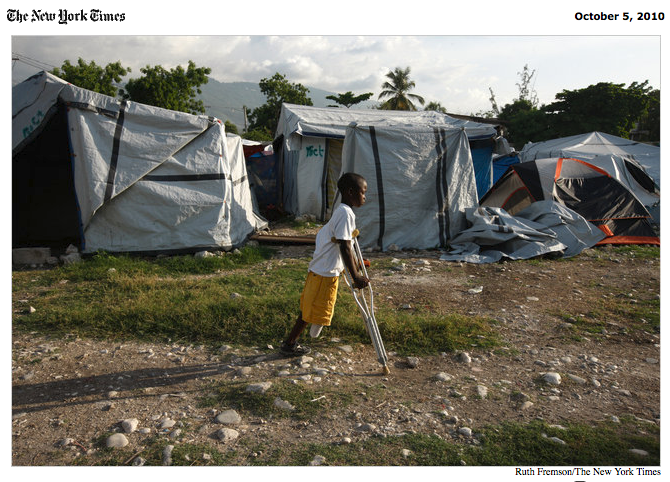 Interviewed in September, Mr. St. Fort said that the Haitian government had paid him $25,000 to let the people stay until December. But, he said, that was not enough. He maintained that he could have earned $150,000 over the same period from evangelical conventions and political party assemblies. “I don’t intend to keep this arrangement going at the price the government is offering,” he said.

At the Church of God site, church officials are also impatient. Where the people go next should be the government’s concern, they say. The church’s land — with a school, Bible college and air-conditioned houses under construction for the missionaries rebuilding churches in the disaster zone — is private property. The homeless are in the way.

Edner Villard, 33, a camp leader, knows that church officials feel that way, and he resents it. He said that he was shocked when he overheard a pastor, his voice raised in anger, tell United Nations officials about the camp residents: “They give me nothing but trouble!” Mr. Villard said his heart starting beating quickly. “We are so peaceful here!” he said. “I didn’t challenge him, and say, ‘You lie,’ because he is the national representative of the Church of God in Haiti. Who am I? But he should have more compassion. He’s a man of God, and a Haitian.”

After the disaster, the church was providing meals to its neighbors, which drew thousands of people to the site. When the rainy season began, humanitarian officials moved those camping on the church site’s steep slopes where landslides were a risk. Other families left of their own accord, renting new homes if they could afford it, or migrating to the countryside. “The people who are left here now are those who have no options,” Mr. Villard said.

Mr. Villard, a former supermarket supervisor, was the only person to survive when the market collapsed in the earthquake, killing dozens. The two-story house he owns in the Valley of Bourdon crumbled, too, and he moved his family to a grassy hillock on the church estate because it was “the closest and most logical place.” He would love to move back home, he said, but his house has been stamped red by government inspectors, meaning it is unsafe. He has no means to demolish it himself, and no materials with which to rebuild it.

“Can’t they provide tools or some kind of assistance?” he asked. “What are we supposed to do? Move into the debris with our raggedy tents?”