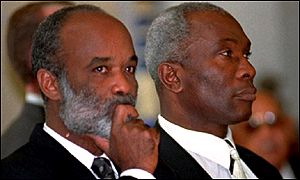 By Joe Mozingo Los Angeles Times PORT-AU-PRINCE, Haiti — Haitian President Rene Preval peers off and rubs his beard when he thinks about those 35 seconds when the earth convulsed. Preval was feeding his 8-month-old granddaughter dinner in the courtyard of the presidential mansion. They were thrown to the ground as the house collapsed. Seeing the city’s wreckage, he couldn’t comprehend the scope of death and ruin.

PORT-AU-PRINCE, Haiti — Haitian President Rene Preval peers off and rubs his beard when he thinks about those 35 seconds when the earth convulsed.

Preval was feeding his 8-month-old granddaughter dinner in the courtyard of the presidential mansion. They were thrown to the ground as the house collapsed. Seeing the city’s wreckage, he couldn’t comprehend the scope of death and ruin.

“Pain made me speechless,” he said in an interview in an office behind the half-collapsed National Palace. “As a person I was paralyzed.”

In the days and weeks after the Jan. 12 earthquake, Haitians desperately wanted to hear from their leader. Soon they were furious at his silence.

“I was much criticized for not having spoken. . . . To say what? To the thousands of parents whose children were dead. To the hundreds of schoolchildren I was hearing scream, ‘Come help me!'” He pauses and sighs. “I couldn’t find the words to say to those people.”

Preval, 67, a quiet former agronomist with a gap-toothed smile and silver beard that some Haitians suspect has magical powers, has always been an enigmatic figure. He concluded his first term as president, in 2001, with a prophetic warning of the chaos and retreated to a tiny home in the northern mountains to help peasants grow bamboo.

When he ran again in 2006, he barely campaigned and said almost nothing. Political observers were perplexed by his candidacy, because he never seemed to really like being president. He certainly never showed the thirst for power of any of his rivals or predecessors, and his return to the National Palace felt so casual as if to be almost accidental.

So did his success. Preval’s government quietly settled a gang war that had paralyzed the capital, stopped a horrific spate of kidnappings, restored electricity, reformed a corrupt police force and secured trade preferences from Washington. And despite being hit by two destructive hurricanes, Haiti experienced a semblance of political stability for the first time in decades.

“I’ve never seen a political figure as shrewd as Rene Preval. . . . Can you imagine a politician who gets to power and he didn’t even campaign?” says Michele Montas, a longtime journalist and now a special adviser to the head of the U.N. mission in Haiti. “I really think he’s misunderstood. But to some extent it’s his own fault.”

Haitians have long grumbled about Preval’s inability or unwillingness to speak to the masses and pitch a vision of the future. But when the earthquake killed an estimated 230,000 people, displaced more than a million more and leveled whole swaths of the capital, what was once seen as a tolerable quirk in a humble man became a focal point of the nation’s outrage.

Asked what Preval has done for the country, people in many parts of the capital grimace or swipe their hands in disgust, as if the answer is so obvious that the question itself is an outrage.

“Preval didn’t do a damn thing,” says Kerby Badio, 28, living in the sprawling tent camp. “He can’t even get the palace fixed.”

Foreign aid groups and diplomats have complained that Preval has been indecisive and has failed to settle key issues of where to settle the displaced.

The public reaction to Preval has big political implications for the country’s recovery in a presidential election year. Preval, who cannot run for re-election, founded a new platform, Unity, to maintain some political continuity when he departs. But his lack of popularity leaves the election wide open.

Preval rode to power on the wings of his political mentor, the fiery slum priest-turned-president, Jean-Bertrand Aristide. The two had become friends when Preval owned a bakery that supplied free bread to Aristide’s church.

When he succeeded Aristide as president in 1996, they had grown estranged. Aristide succeeded him in 2001.

Preval’s first term was noted for many improvements — new roads, schools, hospitals. He cleaned out many of the “zombie” employees on the government payrolls and investigated human-rights abuses. He has always said he prefers practical steps to sweeping ideology or rhetoric.

Preval details a range of plans to build temporary shelters, followed by tall apartment buildings, to bring order to the teeming neighborhoods where houses were literally built atop one another. He appointed a civil engineer to work with U.N. officials and relief organizations to settle land disputes and find suitable places for the people in the tent camps.

“If the people know that within five years there will be apartment buildings, they will go,” he said.

But he knows he is in no position to promise them this. The election is scheduled for Nov. 28. The U.N. advisers working on the issue hadn’t even heard of this apartment idea, and they appeared to be waiting for his successor.

He hopes he can make some headway before his legacy is sealed by the catastrophe.

“There was so much death, so much suffering, one has to find a person responsible for that. Since they can’t accuse the one up there,” he says, pointing up, “they are accusing the one in the palace. Sometimes you have the impression people are accusing you of actually causing the earthquake.”

I am going to vomit again!

Preval was not in the yard, feeding his granddaughter.

He was drunk at his girlfriend’s house and disappeared for over a week, as did MINUSTAH.

The two controlling elements were effectively nowhere to be seen for over 7 days, 7 terrible days of death and destruction. Were it not for the International Community’s immediate reaction, we would have really been in trouble.

HERE IS A SHORT QUOTE FROM THE ARTICLE

So did his success. Preval’s government quietly settled a gang war that had paralyzed the capital, stopped a horrific spate of kidnappings, restored electricity, reformed a corrupt police force and secured trade preferences from Washington. And despite being hit by two destructive hurricanes, Haiti experienced a semblance of political stability for the first time in decades.

“I’ve never seen a political figure as shrewd as Rene Preval. . . . Can you imagine a politician who gets to power and he didn’t even campaign?” says Michele Montas, a longtime journalist and now a special adviser to the head of the U.N. mission in Haiti. “I really think he’s misunderstood. But to some extent it’s his own fault.”

Preval didn’t settle the gang problem. He took over control of them and has used these groups as a terror element to keep society’s heads down. The Amaral Duclona case is one example. Preval used Duclaona, and his gang, as a hit team. When things got too hot for Duclona, he would seek sanctuary in the National Palace, or at Preval’s sister’s house. If some policeman was dumb enough to bother him, a phone call to Preval would settle things. An arrest?? No problem, Preval would send a man and vehicle to save his friend.

When the MINUSTAH net began to really close on Duclona, other steps were taken.

You see, Duclona had killed the French Consul, on Preval’s orders. The French do not play.

So Preval had Jude Celestin obtain a passport in a false name. The night before Duclona left the country, he stayed at Preval’s sister’s house. He was then smuggled into the Dominican Republic and set up in a house there.

Money was transferred to him Via Western Union – MINUSTAH now has all of the receipts showing the cash came from the National Palace, and Prime Minister’s office.

When MINUSTAH arrested him he called for Preval, but the president could do nothing.

Duclona then gave everything up in interrogation. 100 plus killings on Preval’s orders, including the French Consul and a guy named Moreno….who had disappeared.

Moreno headed a government agency controlling the purchase and operation of heavy equipment. (Celestin now sits in his chair) There was a purchase of $100,000,000 in new equipment. Preval planned to buy used equipment for $50,000,000 and pocket the difference. Moreno would not sign off on the deal so he was murdered.

Jude Celestin took his position and the deal went through. Celestin now controls reconstruction and the game goes on.

Duclona also testified to his coordination of kidnaps for Preval.

The vast, vast, vast majority of the kidnaps are initiated by Preval as a tool to guarantee insecurity, fear and control. This month there has been over 30 kidnaps in the Petionville area alone, that the police know of. They say many more go unreported.

I am sitting here at 3 AM writing this as my generator roars away in the background. We have not had any power for some time and must depend on generators.  Preval uses electrical power as a political tool, cutting it off to increase tension and give criminals darkness under which to operate.

I am sitting here at 3 AM, rather than sleeping, because the gunfire woke me up, as it did last night, and the night before.

It is a good tension builder.  You do not know where the gunfire is or what it means, surrounded by dark, dark, darkness.

With regard to the Hurricanes, he did nothing other than steal the relief supplies and $198,000,000 from the Petro Caraibe Fund, set up to help hurricane victims. He is doing the same thing with the quake effort, stealing material and blocking it in customs while his people suffer and die.

He will release the blocked material immediately before the election in a cynical move to make it appear his candidates for parliament, and the presidency, are responsible for the surge of assistance.

Michele Montas is a whore!

Her husband was assassinated in 2000 and Preval was complicit in this killing, as he was in the murder of many others, including that of Mireille Durocher-Bertin, in 1994. As spokeman for the UN Secretary General, she convinced that Oriental Jerk that Preval was Haiti’s only hope. Much of our present problem is because of these lies.

Now, after being fired in New York, she pops up as Special Adviser to MINUTAH, while she actively works as a leading member of Preval’s political party INITE!!!

Wake up and smell the roses!

Although, what you smell is not roses!!!

Yet again, the possibility of a really valid election will be spoiled by the International Communities acceptance of Preval’s criminal control of the electoral process and the letting of contract to rebuild Haiti.

Elizabeth Delatour just lost the $300,000,000 commission  she negotiated for a petroleum refinery deal in Haiti. Seems as though the Americans blocked this one!

And the rape goes on!

When will someone do the honest thing and neutralize Preval?

3 thoughts on “In Haiti, Preval’s quiet goes from a quirk to a flaw-Added COMMENTARY By Haitian-Truth”