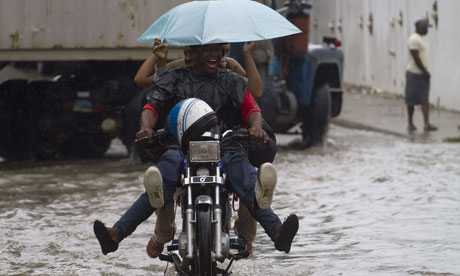 Haiti and the United Nations are planning an appeal for emergency aid after Hurricane Sandy killed 54 people and devastated crops last week before going on to hit the United States.

With hundreds of thousands of people still living in tents after the earthquake in 2010, Haiti was hardest hit by the storm. The call for donations follows a 96% drop in financial support for UN humanitarian programmes over the past two years, despite the continued vulnerability of the western hemisphere’s poorest country.

Sandy has worsened the threats posed by cholera and food shortages, say senior aid officials evaluating the damage from the latest disaster before a meeting this week to draw up an appeal.

“Haiti is trying to get its house in order, but each time disaster strikes, the progress is interrupted,” said Johan Peleman, head of the UN’s office for the co-ordination of humanitarian affairs. “This country is exposed to devastating consequences by each storm. With every burst of rain, entire mountains are washed away.” He said humanitarian funding had fallen from $2bn (£1.2bn) in 2010 to just $75m this year.

Following a huge storm earlier this year, Haiti was only skimmed by Sandy’s tail, but its dire infrastructure and high levels of deforestation magnified the damage and number of casualties.

The government raised the death toll to 54 on Tuesday with 20 still missing. Tens of thousands have been left homeless. In just four days, the south and south-west of Haiti was soaked by 50cm of rain, equivalent to almost an average year’s worth in London.

Some victims were washed away when rivers burst their banks. Others died in accidents caused by the storm. One family of five – a mother and her four children – were crushed when the roof of their home collapsed in Grand-Goâve.

But the greatest loss of life may still be to come as the country struggles to cope with the accumulated impacts of earthquakes and hurricanes which have devastated housing and crops.

The deluge compounded more than a year of misery for the 370,000 refugees who have been living in temporary camps since 2010. The winds scattered thousands of tents and ripped through the tarpaulins of countless others. Video images show residents trying to sleep on sodden bedding and wading through muddy water on flooded pathways.

Oxfam and the International Federation of the Red Cross are distributing additional sanitation and water purification kits. The government and aid agencies are also preparing to provide food and seeds to try to offset the harvest-time loss of crops such as plantains, bananas, maize and sugar cane.

“It was a relatively small disaster, but it will have a big impact,” said Amelie Gauthier, of Oxfam’s office in Port-au-Prince. “These rains will have an impact for months to come. All it takes is the loss of one or two lemon trees and some families here will no longer be able to afford to send their children to school. As people lose more and more of their capital, the vulnerability increases with the accumulation of disasters.”

The government has been praised for its response, but the series of disasters is taking its toll. “We have a lot of work ahead of us in terms of the aid that we will need to deliver in the days, weeks and months to come,” prime minister Laurent Lamothe has said. “It won’t be easy because there are many roads and bridges that have been cut off.”

The government has warned the population that more extreme weather may be coming. “In November we may see more hurricanes. So if the government doesn’t work hard to protect the people Haiti will know a very hard time by the end of this year,” said a meteorological official quoted in a local newspaper.