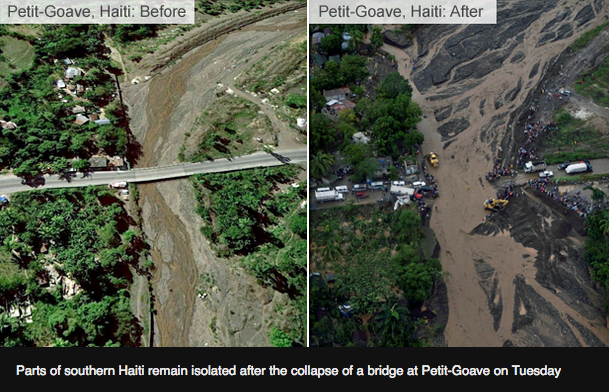 Some 50 people were reported to have died in the southern town of Roche-a-Bateau alone.

The peninsula’s main city, Jeremie, saw 80% of its buildings levelled. In Sud province 30,000 homes were destroyed.

The hurricane has again been upgraded to a Category Four storm, the second highest hurricane classification, as it heads for the US state of Florida.

The new death toll was given by the country’s Civil Protection Force.

Hurricane Matthew – the most powerful Caribbean storm in nearly a decade – has pounded the Bahamas after slicing through Haiti and Cuba. 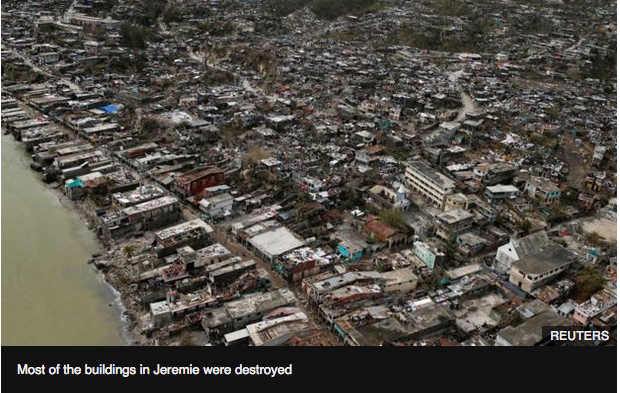 Most of the fatalities in Haiti were in towns and fishing villages around the southern coast, with many killed by falling trees, flying debris and swollen rivers.

The storm passed directly through the Tiburon peninsula, driving the sea inland and flattening homes with winds of up to 230km/h (145mph) and torrential rain on Monday and Tuesday.

The collapse of an important bridge on Tuesday had left the south-west largely cut off.

Non-governmental organisations said phone coverage and electricity were down and people were running out of food and water.

The BBC’s Tony Brown in south-western Haiti said he had seen people trying to cope with the mass destruction on their own, trying to rebuild from the rubble but without the help of the army or police.

Across the country, there were some 350,000 in need of assistance, according to the UN Office for the Coordination of Humanitarian Affairs.

A spokesperson for the American Red Cross, Suzy DeFrancis, said the first priority was to get phone networks across the country back up and running.

“We will bring in technology to help do that,” she said.

“We also have warehouses with relief supplies that we will be distributing. Some of the needs that families may have are kitchen kits so they can cook meals, any kind of hygiene kits and then we are most worried about cholera, so we will be helping to distribute aqua tabs to purify the water.”

The country is one of the world’s poorest, with many residents living in flimsy housing in flood-prone areas.

Four people also died in the storm in the neighbouring Dominican Republic on Tuesday.

Why Haiti is vulnerable to disasters

More than half of Haiti’s city-dwellers live in overcrowded shantytowns that take the full force of any earthquake, hurricane, or disease outbreak. An ongoing cholera epidemic, triggered by the arrival of UN troops after the 2010 earthquake, has killed thousands of people.

Political instability and corruption have been a factor. Without effective government for decades, Haiti currently ranks 163rd out of the 188 countries on the UN Human Development Index. It spends little on storm defences.

Are you in Haiti? Have you been affected by Hurricane Matthew? Are you preparing for its arrival in Florida, Georgia and North and South Carolina? Only if it safe to do so, you can share your experience by emailing haveyoursay@bbc.co.uk.

Please include a contact number if you are willing to speak to a BBC journalist. Please stay safe. You can also contact us in the following ways:

If you are happy to be contacted by a BBC journalist please leave a telephone number that we can contact you on. In some cases a selection of your comments will be published, displaying your name as you provide it and location, unless you state otherwise. Your contact details will never be published. When sending us pictures, video or eyewitness accounts at no time should you endanger yourself or others, take any unnecessary risks or infringe any laws. Please ensure you have read the terms and conditions.

Copyright © 2016 BBC. The BBC is not responsible for the content of external sites. Read about our approach to external linking.