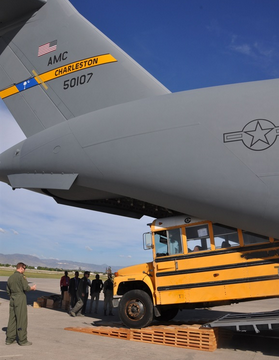 By US Air Force

JOINT BASE CHARLESTON, S.C. (AFNS) — A recent two-pronged mission not only helped keep 315th Airlift Wing aircrews current on all their certifications, but also delivered three badly-needed buses to schools in Haiti.

Reserve Airmen of Joint Base Charleston’s 317th Airlift Squadron, with support from three additional Reserve Airmen of the 514th Air Mobility Wing from JB McGuire-Dix-Lakehurst, New Jersey, transported school buses in a C-17 Globemaster III from JB Charleston to Port-au-Prince, where they were offloaded at Toussaint Louverture International Airport, Dec. 16, 2017.

Upon arrival, the crew was greeted by the president of Those Angels Foundation, an outreach organization that operates schools in the area, as well as a Haitian congressman and over a dozen school children. The mission is another way to show support to U.S. partners in the region, and support for Haitians still trying to recover from the widespread devastation of the 2010 earthquake. 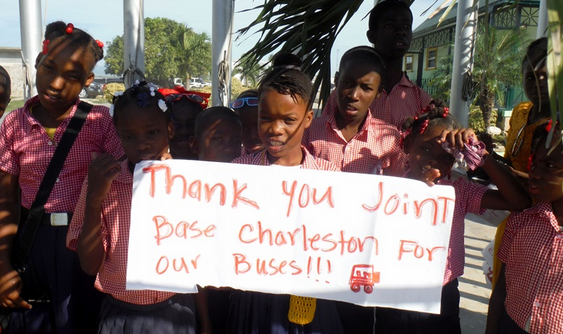 “There are about 300 students in this program that will be affected by these school buses,” said Claude Joseph, president of Those Angels Foundation, who, along with Sister Cities International, applied to the Denton program to have the buses transported via military air. “Two and a half years ago, we got the buses from the Sacramento City Unified School District, and we’ve been struggling to get them to Haiti. Now, the United States Air Force and the Denton Program said they would help us out, and we’re very appreciative.”

The buses were transported under the Denton program, which allows for military aircraft to transport humanitarian cargo when space is available, so it’s done at little or no additional cost to the taxpayer. Another three buses were delivered the following day by another aircraft, bringing the total number to six. Having the buses helps increase school attendance by minimizing the hurdle of transportation.

The event was also attended by Bertin Augustin, a Haitian congressman (Député) who spoke through interpretation by Joseph.

“We would like to thank you for your support and bringing the buses,” said Augustin. “We hope that we can continue to work together to move forward.”

On the flying mission, the aircraft was commanded by Lt. Col. Derek Bishop, chief of safety for the 315th AW.

“In addition to serving the humanitarian side through the Denton program, this mission also really helped our crews maintain our flying currency,” said Bishop. “We had to navigate across multiple countries’ airspace and work with foreign air traffic controllers, all of which helps us to stay up to date on all our requirements.”

Maintaining currency means that the Reserve crew members are always qualified for any task their job entails. In addition to the pilots staying experienced, the loadmasters who managed the aircraft’s cargo during loading, flight and offloading also gained from the experience.

The school buses were formerly used by the Sacramento, California school system and were purchased by the humanitarian organization when they were surplused. They were then received by Those Angels Foundation in conjunction with Sister Cities International, which operates schools in Port-au-Prince and nearby areas. The recipients completed a thorough application process to ensure the buses will be used for their intended purpose, exclusive to children.

The 315th AW and JB Charleston have supported the Denton program since 1987, when it was established. 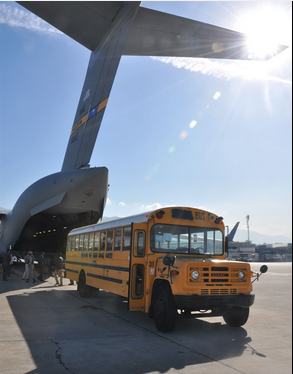