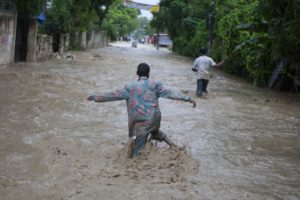 PORT-AU-PRINCE, Haiti — Twelve people have died in Haiti as a result of heavy rains unleashed by a cluster of storms in the northern Caribbean, authorities said Wednesday.

Cap-Haitien Mayor Yvon Alteon said four more bodies had been found, in addition to the eight deaths reported earlier. He said that some 5,000 people were in shelters and that flooding at the airport forced the cancellation of several flights.

Prime Minister Laurent Lamothe said the government would spend about $740,000 to help communities affected by the rains and distribute food and water-purifying equipment.

“We share the pain and sorrow of all the families who became victims of the floods,” he said, adding that a group of government officials were traveling to Haiti’s northern region on Wednesday to assess the damage.

Authorities said earlier that multiple crops were damaged and that numerous animals including goats, cows and chickens have died.

Heavy flooding also was reported in the U.S. Virgin Islands, the Dominican Republic and Puerto Rico. Police in Puerto Rico said a 51-year-old tourist identified as Reynald Haines drowned after currents swept him away at a beach in the popular tourist district of Condado. Police said they did not immediately know where he was from.

A high surf advisory was in effect for the region.

The U.S. National Hurricane Center in Miami said the storms were expected to strengthen slightly as they moved northwestward.