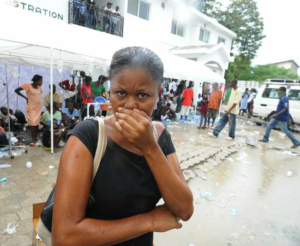 PORT-AU-PRINCE — Haitian health officials are blaming the deaths of more than 100 people suffering from acute severe diarrhea and dehydration on an outbreak of cholera.

“For sure it is that,” said a Ministry of Health official, who asked not to be identified because the government had yet to make an official announcement.

At least 1,000 people had been hospitalized in the lower Artibonite region in recent days, with the main hospital in St. Marc filled to capacity.

The conclusion of cholera was supported by diplomats at one foreign embassy. A report obtained by The Miami Herald stated that foreign health experts working with the Haitian government to identify the problem were “99 percent sure it is cholera” that caused severe diarrhea and vomiting in St. Marc, Mirebalais, Drouin and Marchand Dessalines. On Thursday, Haitian health specialists along with the Centers for Disease Control and Prevention in Atlanta continued to investigate the source of the outbreak while the government trucked in thousands of gallons of water.

South Florida-based Food for the Poor also announced that it was shipping in antibiotic, oral dehydration salts, water filtration units and other critically needed supplies to several cities and rural villages near the outbreak. So far, it had not reached Gonaives, the largest city in the Artibonite region.

The U.S. Embassy warned U.S. citizens that they should only drink bottled water, avoid undercooked or raw seafood and “seek medical assistance if you develop acute, water diarrhea,” it said.

Cholera is a contagious bacterial disease that affects the intestinal system. Symptoms include severe vomiting, diarrhea and dehydration. It can cause death within four to 12 hours after symptoms begin if untreated. Spread through consumption of infected food and water, or feces, the disease is treated with fluids and antibiotics.

The disease outbreak is the country’s first since January’s 7.0 earthquake claimed more than 300,000 lives.

A spokeswoman with the United Nations Office for the Coordination of Humanitarian Affairs said the source of the outbreak is still being investigated.

“We have not received any confirmation on what is causing an increase of diarrhea in the lower Artibonite region,” Jessica Duplessi, a spokeswoman with OCHA said. “There has been an increase in cases of severe vomiting and diarrhea, which in particular is quite an epidemic in Haiti. We still don’t know if it’s coming from one central source or not. That is what the doctors and experts are trying to analyze.”

The Pan American Health Organization also warned against concluding too soon that cholera was the source of the outbreak.

“We just need confirmation of further investigation before we change the labeling and we have a precise diagnosis of the underlying cause,” said Dr. Michel Thieren, senior program management officer with the PAHO Haiti Office. “No one can say for sure. We are assisting with all sorts of rumors.”

He said PAHO officials and the ministry of health officials sent an evaluation mission to the area, and are awaiting the results of tests.

He said the joint PAHO/Ministry of Health evaluation mission received reports of 1,526 cases and 138 deaths of unconfirmed severe diarrhea. The numbers he said must be investigated and remain “very questionable.”

The reports spurred interest among some of Haiti’s candidates in the Nov. 28 presidential and legislative elections. Both presidential hopefuls Jude Célestin and Charles Henri Baker spent the day visiting rural communities impacted by the outbreak and said they went as concerned citizens.

“Every courtyard has at least three to four deaths,” Célestin said in a statement, noting that he first heard the news Wednesday and traveled to the communities early Thursday morning. “People told us they had their kids dying and they did not know what it was. They said the deaths came after the rain. In Drouin, the chief doctor told us they had more than 50 deaths.”

Baker said he was on a campaign tour in the region when he heard the news. He described a scene of people being laid out onto sidewalks, and children dying in the back of one of his campaign pickup trucks before it even reached the hospital.

“It’s bad,” Baker told The Herald by telephone, describing the emaciated look of people in the rural towns of Bac d’Aquin and Danash. “They were just putting people on the side of the road. They look like skeletons.”

Baker said he was told that between 60 and 70 people had died from dehydration and diarrhea. In one town, he saw only one ambulance, and left one of the campaign trucks to transport sick residents.

“I don’t even feel like campaigning anymore. It’s unbelievable when they tell you the number of people who are sick,” he said, describing the problem as “pretty widespread at the moment.”

“I don’t see anybody really taking charge . . . The government needs to be here, take some samples, run some tests and see if it is the water. We need confirmation, not hearsay. The urgency is to save the lives of those who are already sick.”