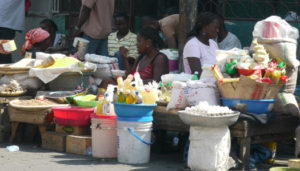 A young man stands on a busy street corner in the Haitian capital wearing the campaign logo of one presidential candidate on his sweat-soaked T-shirt, the name of another emblazoned on his sunglasses while he passes out flyers on behalf of a third.

Jeanty Masier makes no pretense of actually caring about any of the candidates competing in Sunday’s first round of presidential elections, but he’s happy to support any of them — for a price.

“I don’t know much about these political people. But they promised to pay me something, so I’m trying to do some work,” said Masier, a struggling 24-year-old resident of a hillside slum overlooking downtown Port-au-Prince, where the presidential palace stood until it pancaked in a devastating 2010 quake.

It’s campaign season again in Haiti, which means a frenzy of activity not just for the numerous politicians jockeying for power but also the droves of young slum residents like Masier who’ve never held any kind of steady job and are willing to do just about anything for meager reward.

For a few weeks at least, there’s the promise of regular money to be made as human billboards, protesters for hire or paid shills for candidates amid a national election that features 54 presidential candidates, only a handful of whom have even faint name recognition among the vast majority of the population.

Money floods political campaigns in countries around the globe, but Haiti’s flourishing if small-scale election economy is particularly striking for the country’s extensive poverty and the sheer numbers of jobless young people who have to hustle to eke out a living.

For even the vaguest hint of a little cash and a few swigs of rum, recruits will dutifully show up to cheer at rallies, spray-paint slogans on walls, paper the city with campaign posters or deface those of a competitor. Some will even stage violent demonstrations, stuff ballot boxes or make them disappear on election day if political organizers shell out enough to make it worth their while.

At a recent presidential campaign rally in downtown Port-au-Prince, dozens of young men shoved and elbowed in a scrum, neck veins bulging, as they vied for campaign T-shirts and perhaps the chance to carry candidate Steeve Khawly to the stage.

A group who had already secured shirts leaned on motorbikes nearby. Frantzdy Thomas, 29, said he was promised some kind of compensation if he recruited buddies from his neighborhood to support the businessman’s campaign. He said he hoped to get a construction job and was willing to take orders in hopes that a Khawly victory could lead to steady work.

“Whatever the leader tells us to do, we will do. If he tells us to take to the streets and mobilize, we will do that. If he says be calm, we will be calm,” Thomas said. His friends nodded their heads in agreement.

This year’s unprecedented three rounds of balloting will pick Haiti’s next president, two-thirds of the Senate, the entire 119-member Chamber of Deputies and numerous local offices. The Oct. 25 vote is expected to clear the sprawling presidential field for a runoff Dec. 27 between the top two finishers.

Celso Amorim, chief of the Organization of American States’ electoral observation mission to Haiti, said recently that the vote could constitute “a historic moment” for the long-troubled country still recovering from the 2010 quake.

But after years of mercenary campaigning and broken promises by political leaders, it’s hard to find many impoverished citizens of Haiti who are confident their ballots could make a difference. A messy first round of legislative elections in August got a national turnout of just 18 percent.

“Politics is essentially a business in Haiti, unfortunately, and it’s very self-serving,” said Robert Fatton, a Haitian-born politics professor at the University of Virginia and the author of “The Roots of Haitian Despotism.” ”It’s a way of getting the resources of the state, and it’s a way of making money.”

While Haiti has enjoyed relative political stability over the last decade, Fatton said there is widespread voter apathy fueled by an “opportunistic kind of politics where some people are essentially getting paid to vote or getting paid to support candidates.”

In a Monday statement, the U.S. Embassy in Haiti said that the United States, which has contributed some $30 million to help organize the Caribbean country’s elections this year, is “taking note of parties involved in electoral violence” and warned “those who organize, finance, or participate” in voter intimidation and disorder.

Officials were concerned about a flare-up of violence ahead of Sunday’s vote. Esau Bouchard, a mayor in the sprawling slum of Cite Soleil, said 10 people were killed within the district’s boundaries over the last few days, and around nine gunmen were killed in shootouts with police on the outskirts. Neighborhood organizers say politically aligned gangs are feuding over money distributed by politicians hoping to dominate voting in the crowded area.

Analysts say there has been mostly diminished popular enthusiasm for the democratic process in Haiti since 1990, when Jean-Bertrand Aristide became the country’s first democratically elected president. He was deposed in a military coup months later, and flaming tire barricades soon became a trademark of his armed loyalists.

Democracy revolves around the politics of personality in Haiti, with parties and platforms often existing simply as vehicles for individual politicians who try to lure the biggest crowds in a display of political muscle.

There’s no shortage of struggling citizens willing to take part in the political theater in the Western Hemisphere’s poorest country, and one of most unequal in the world. Nearly 60 percent of Haitians live under the national poverty line of $2.44 a day, and an additional 24 percent earn less than half that. Decades of haphazard migration to cities, especially metropolitan Port-au-Prince, has expanded urban slums and shantytowns. Many young men are idle and easy pickings for gangs and political activists.

“Youth violence is often expressed as a reaction to perceived social and economic exclusion — grievances that can be easily mobilized by political interests,” the World Bank said in a recent report on Haiti.

At a rally in Port-au-Prince, teenagers and young men from the Martissant district of Ti Bois, a neighborhood of dirt-floor hovels, arrived on motorbikes shouting support for the faction of presidential hopeful Sauveur Pierre Etienne, as a deejay blasted bass-heavy Haitian pop music.

“We want the people to support this candidate 100 percent,” said Pierre Laguerre, a neighborhood organizer who gathered the young men for the candidate’s political faction. “We don’t know yet if we will be told to burn tires if things go badly.”