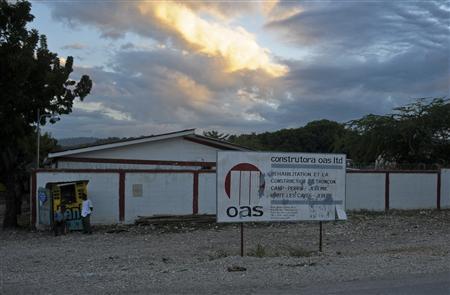 (Reuters) – The smooth black asphalt of National Road No. 7 stretches for about five miles beyond Camp Perrin, a town in fertile southwest Haiti.

It abruptly stops before reaching farmer Liphete Denis’ front door, replaced by a rocky dirt path that floods in the rainy season and billows dust clouds when the weather turns dry. “I don’t know why they stopped,” said Denis, 43. “We’d like the road done. We need it.”

The 56-mile road project was meant to connect the southern port city of Les Cayes with Jérémie, a city in one of Haiti’s most neglected regions. It was to resurface a pot-holed road that passes between narrow mountain ranges and fords a flood-prone river, making transportation to Jérémie arduous and dangerous.

Instead, the unfinished road has become a symbol of how efforts to improve Haiti’s infrastructure, especially after the devastating 2010 earthquake that killed more than 200,000 people, have run up against the country’s land laws.

eatment facility on the outskirts of the capital Port-au-Prince and prevented the start of construction on a $26 million public hospital in the city of Gonaives.

The Vatican has shied away from building and re-building churches in this strongly Catholic country, and the U.S. Agency for International Development (USAID) decided to build permanent houses in the far north of Haiti rather than the more legally challenging capital, where most of the earthquake damage occurred.

WHERE DID THEY GO?

Paving of National Road No. 7 was announced in 2008 by the Canadian International Development Agency (CIDA), in conjunction with the Inter-American Development Bank (IADB), with a cost of $100 mil

lion, which has since risen to $132 million.

Brazilian company OAS Construtora won the bidding process with an offer of $94 million and in 2009 moved in to begin working on the first 44-mile stretch of road. To save money, state construction company CNE was to handle another section from Les Cayes to Camp Perrin.

Then one day, Denis said, the Brazilians and their heavy machinery were gone.

The concrete walls of the small, two-room home he shares with his wife and infant child are still cracked from the shaking caused by OAS’ trucks. 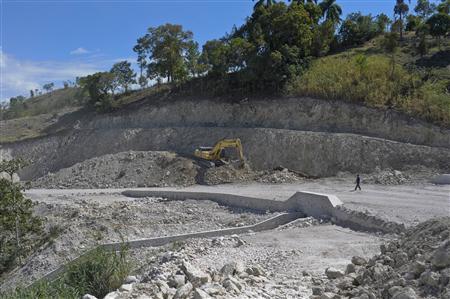 Some roadside homes were razed by the state to make way for the wider road. Others were slated for demolition, but compensation was haphazard. Denis said he was presented with a hand-written notice in early 2011 saying he would receive the equivalent of $3,000 when his own home was knocked down, but no one ever returned with the money or a bulldozer.

Halfway to Jérémie, in the village of Beaumont, the story is much the same. In July, roadside homes were marked with red for demolition but they still stand, and it is not clear when the owners will be compensated and, if so, how much they will be paid.

National Road No. 7 narrows to a jagged single lane as it approaches Beaumont, evidence of a recent fatal bus accident still scattered along the mountainside. Beyond Beaumont, there is at least another hour of treacherous driving before reaching the last 12.5 miles to Jérémie, which are paved.

OAS has said its work was hindered when it ran into occupied parcels of land whose ownership was unclear and residents who had not been paid to vacate.

“The process of expropriation took much longer than an

ticipated,” said Gilles Damais, chief of operations for the IADB in Haiti. “One person would receive payment one week, and the following week someone else would come and say, ‘No, he’s not the owner, another person owns this land.'”

Behind schedule and over budget, OAS stopped work in July and filed a claim against the state for more than $40 million. When the Haitian government countered with a $2.7 million claim of its own, both sides dropped their demands in what one state official called “a gentleman’s agreement.” The OAS contract was formally terminated in December.

News of the abandoned road project disheartened and angered residents of the underdeveloped Grand’Anse area, but nowhere was there greater desolation than in Jérémie, a quaint ‘City of Poets’ on the tip of Haiti’s southern peninsula.

Violent demonstrations rattled the normally quiet city for several days; tires were burned, cars destroyed, and at least one resident was killed. To mitigate the situation, the government promised that another company would take over work by mid-January, but with the project still dormant the people of Jérémie renewed their protests last week. 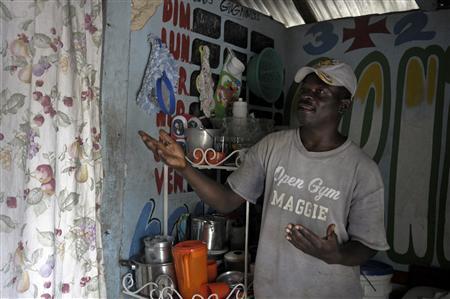 Government officials have said that it will soon be announced that Dominican construction company Estrella will take over the project.

Canadian International Development Agency head Julian Fantino has expressed impatience over the slow pace and inefficiency of development projects in Haiti. During visit to Haiti in November, Fantino told Reuters, without specifically mentioning the road project, “Canadians are not about to write a blank check without some assurances and regard for outcomes.”

Haiti’s land registry problems can be traced back to its independence in 1804 and revolutionary leader Jean-Jacques Dessalines’ push for land reform.

The transfer of a land title involves surveyors, notaries, and the central tax authority. To avoid the expense and bureaucracy, many property owners use informal methods to transfer land making it difficult, if not impossible, to determine a rightful owner.

Title holders may deposit a copy with ONACA, the National Land Registry Office, but they are not obligated to do so.

“The ONACA office is an unwanted child,” said its director, Williams Allonce. Since its creation in 1984, the chronically under-funded office has only managed to register 5 percent of Haiti’s more than 10,700 square miles.

A second agency, the Inter-Ministerial Committee for Land Planning, is also working on a national registry, and the public works ministry has its own internal commission for land title and expropriation management.

After the earthquake, state and foreign agencies were eager to start rebuilding, but identifying landowners in the midst of chaos was often impossible so relief agencies had to find legal workarounds.

“Literally, no one had the answer for how you buy and sell property in Haiti,” said Elizabeth Blake, a vice president at Habitat for Humanity International.

Eighteen months after the earthquake, Blake initiated the Haiti Property Law Working Group. Representatives from foreign and state agencies volunteered to help demystify laws and procedures for purchasing, selling, and formalizing land rights. At the end of 2012, an official how-to guide was published in French, Haiti’s national language, and English.

“It’s an extremely complex problem, and it could put the brakes on reconstruction if we don’t find a way around it,” said Alfred Piard, Haiti’s director of public works.

On a visit to Haiti in January, former U.S. President Bill Clinton said ownership and tenure security issues had to be addressed if reconstruction was to move forward.

“What I’d like to see done is a renewed emphasis this year on the part of the government in clarifying the land laws … and doing other things that will basically cut down on the delay and the cost in starting businesses and starting investments,” Clinton told Reuters.

Gary Jean, an engineer at the public works ministry, said the state had learned an expensive lesson with the OAS road fiasco. Next time, Jean said, all land must be surveyed, accounted for and expropriated before work begins.