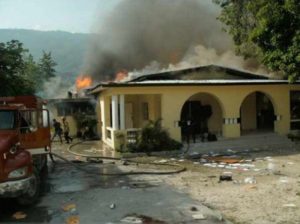 As of Monday, December 6, the Provisional Electoral Council (CEP) was busy at work at the tabulation center putting the final touches on the results that will be announced shortly.  Out of the 99 seats up for election in the legislature, only two senators and nine deputies won their seats in the first round. Mirlande Manigat and Michel Martelly qualified for the presidential runoff.  Despite being “unofficial”, the news (see: http://radiokiskeya.com/spip.php?article7305 )was so certain that many in the foreign press broadcast these results on Monday night, and on Tuesday afternoon at a USIP roundtable on Haiti, OAS Assistant Secretary, Ambassador Albert Ramdin, confirmed that information.

On Tuesday, December 7 around noon, President Preval ordered the CEP President Gaillot Dorsinvil and Director General Pierre Louis Opont to change the results. They did, see: http://www.youtube.com/watch?v=dhFkYsk65o0&feature=player_embedded They gave INITE 90% of legislative seats, sent their remaining legislative candidates to the runoff, and replaced Martelly with Jude Celestin, the ruling party’s candidate.  In the run up to the elections, it has been extensively reported that Celestin would win in rigged elections.  Despite the fact that the plot was exposed, Preval did not alter his plot to illegaly install Celestin as president and control two-thirds of parliament.

Also widely reported was the fact that the root of every political crisis in Haiti is a rigged election.  This overt manipulation and disrespect for Haitian citizens has infuriated people around the country and in the Diaspora.  Protests have broken out throughout the country: