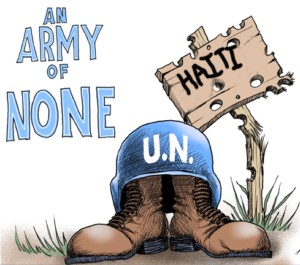 The emergency in Haiti isn’t over. It’s getting worse, as the outside world’s attention fades away. Misery rages like a fever in the hundreds of camps sheltering hundreds of thousands of the 1.3 million people left homeless by the Jan. 12 earthquake. The dreaded rains have already swamped tents and ragged stick-and-tarp huts. They have turned walkways into mud lakes and made difficult or impossible the simple acts of collecting and cooking food, washing clothes, staying clean and avoiding disease. The rainy season peaks in May.

Worsening the weather crisis are the unchecked sexual assaults and rapes in the camps, where families are squeezed side by side in flimsy quarters and women and girls are left unprotected after dark.

A new report from Amnesty International affirms that security is inadequate, that police and soldiers are often missing, that every nightfall brings terror. Victims stay silent because rapists go uncaught and unpunished; what little policing exists is focused on other priorities.

Both the shelter and safety crises demand an urgent response, and while feelings of urgency abound in Haiti, their impact is only sporadically felt. The little country is swarming with well-intentioned organizations, each trying to do their little bit of help. One group is trying to distribute thousands of flashlights to women and girls. It’s a kind and practical gesture, but what they really need are shelters from sexual violence, and adequate policing. Haiti has neither, Amnesty International reports.

Any effective solution would need to be coordinated with the government of Haiti, whose leaders have been absent from the lives of Haitian citizens since the disaster. When former Presidents George W. Bush and Bill Clinton visited the capital of Port-au-Prince this week, they joined President René Préval in touring the camp in Champ de Mars, across the street from the slumped-over presidential palace. Screams of frustration greeted them. Where have you been? Why have you not helped us?

From the first days of this disaster, someone should have been racing to find places to build sturdy housing away from the densely crowded, quake-shattered capital. But the Haitian government only this week took the necessary step of invoking eminent-domain power to seize land. Sites have been identified, but the number of places available for new housing is still zero. Only a few hundred people have been moved from the camps.We understand the government has been working hard to prepare for a donor conference next week, where big ideas for the future will be discussed. But back in old Haiti, land of tents and tarps, workers have been putting fresh coats of plaster and blue paint on buildings on the United Nations compound in Port-au-Prince, and the rest of the world is moving on.

Some United States troops have started going home. Overmatched workers for United Nations agencies and nongovernmental organizations are toiling away, many of them heroically. But ultimately progress must be judged by results. New ways must be found to solve problems, and urgency sustained. Haiti is in danger of becoming what it always was, a nagging blot on the conscience, a neglected project that never gets done.