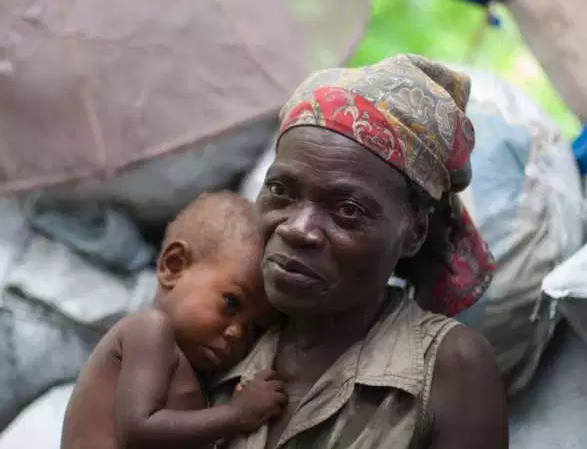 PORT-AU-PRINCE, Haiti – The present situation in Haiti is not encouraging. Fuelled by ongoing protest the consequences of years of mismanagement and corruption, the effects of Haiti’s vulnerability in the face of climate change, aggravate existing threats to healthcare, peace and security; have some experts expecting the worse in the coming months.

‘Haiti faces critical food shortages in 2019. Between April and June, more than five million Haitians are not able to put food on the table, of which 2.6 million people require urgent food and nutritional assistance. The prevalence of acute malnutrition among children under five years of age remains high, and above World Health Organization (WHO) emergency levels in several locations, including the North-West department.

‘More than two years after Hurricane Matthew struck the Haitian coasts, more than 140 000 affected households still lack access to seismic-resistant homes and shelters and remain highly vulnerable to future disasters. Humanitarian needs persist in internally displaced camps set up after the 2010 earthquake. Around 37 500 Haitians are still sheltered in camps, where access to water and basic services remains limited.’

Peasant and former deputy Paul Andre Garçonnet told Prensa Latina that all studies they have done since 1986 to date proved that Haiti could produce rice, be self-sufficient and export it in large quantities.

Garconnet operates an agroecological plot in the vicinity of the Artibonite Valley, one of Haiti’s most important rice-producing areas, said that a bunch of the Haitian peasantry produce in the Dominican Republic the same foods that could be harvested in Haiti.

‘We currently have a starving peasantry that does not have the capacity to boost its own lives and the lives of organizations, but it is part of the government’s strategies,’ he said.

‘Haiti is the largest beneficiary of the European Commission’s humanitarian aid in Latin America and the Caribbean, with €404 million provided since 1994. EU aid brought relief to the victims of the 2010 earthquake and several major hurricanes. The EU assistance also helps tackle the cholera epidemic, droughts, and the migration crisis, while strengthening local capacities to prepare for, and respond to, natural and epidemic hazards.

‘In 2019, the EU will invest €3 million in disaster preparedness and will consolidate the food assistance response.

‘In 2018, the EU invested €3.4 million in disaster preparedness including: water, sanitation and hygiene (WASH) preparedness, rapid response capacities, disaster-resistant shelter techniques and drought preparedness. An additional €12 million were mobilised to respond to acute food insecurity and shelter needs, as well as to increase coordination across humanitarian operations.

‘In 2016 and 2017, almost €20 million in emergency aid to cover immediate the needs of those most affected by Hurricane Matthew, ranging from food to shelter, livelihood, water, nutrition, and education. Since 2014, €49 million have been allocated to address acute food and nutrition needs through cash transfers, provision of safe water, and livelihood support.

Lawyers Without Borders Canada (LWBC), in collaboration with the Interuniversity Institute for Research and Development (INURED), recently made public a study on assistance to cholera victims in Haiti.

The epidemic, which had devastating health, social and economic consequences in the country following the 2010 earthquake, has so far killed nearly 10,000 people, while more than 820,000 people have been infected.

On a daily basis, illegal migration attempts to the United States via the maritime domain continues in ‘unsafe and unseaworthy vessels’ according to Captain Aldante Vinciguerra, Coast Guard 7th District chief of response.

A total of approximately 4,567 migrants have attempted to illegally enter the US via the maritime environment since October 1, the beginning of the 2019 fiscal year, compared to 4,302 migrants in the fiscal year 2018.