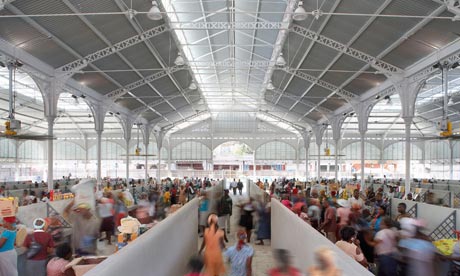 Show of metal … In offering tangible evidence of how donor money has been spent, the rebuilt Iron Market in Port-au-Prince is unusual. Photograph: View Pictures/Alamy

Saturday marked the third anniversary of the tragic earthquake in Haiti that claimed between 230,000 and 300,000 lives. The grim landmark has prompted much discussion about the struggles surrounding reconstruction and also some hope about what may come next.

Most observers agree that the international response to the quake was overwhelming. Haiti received an unprecedented amount of support: more than $9bn (£5.6bn) in public and private donations. Official bilateral and multilateral donors pledged $13bn and, according to the UN Office of the Special Envoy for Haiti, almost 50% of these pledges ($6bn) have been disbursed. Private donations are estimated at $3bn.

Where has all the money gone? Three years after the quake, we do not really know how the money was spent, how many Haitians were reached, or whether the desired outcomes were achieved. In a policy paper published in May, and in a more recent blogpost, we unpacked the numbers, many of which came from the UN Office of the Special Envoy.

We found that about 94% of humanitarian funding went to donors’ own civilian and military entities, UN agencies, international NGOs and private contractors. In addition, 36% of recovery grants went to international NGOs and private contractors. Yet this is where the trail goes cold – you can look at procurement databases to track primary contract recipients, but it is almost impossible to track the money further to identify the final recipients and the outcomes of projects.

Breaking the figures down by donor isn’t much better: 60% of US-disbursed recovery funding is “not specified” (pdf), as is 67% of Canada’s aid to Haiti (pdf). Data for the European commission shows that 67% of humanitarian funding and 43% of recovery funding is to “other international NGOs” (pdf). Data reporting becomes even more opaque when one looks for the specific organisations, agencies, firms or individuals that have received grants or contracts in Haiti. Detailed financial reports and rigorous impact evaluations are hard to find.

There are some exceptions, but most organisations only publish case studies or other descriptions of their work; negative outcomes or failures are almost never documented. Of the thousands of projects being run in Haiti, we found only 45 organisation- or project-level evaluation reports at the end of 2011. A total of 23 reports do not have specific project data and only four have any specific detail about how the money was spent.

It is a contradiction that the Haitian government is asked to improve transparency when the international aid community itself fails to provide adequate information to the public. Pierre Erold Etienne, director general of the Haitian finance ministry, said: “[The] real problem is that we do not have – or, I should say, we have only very little – overall information on aid (pdf) … We are required to be transparent. We publish the financial information relevant to the execution of our budget. All we ask is for the same transparency from our donor friends, which should help both us and them.”

It is very hard to achieve good outcomes when we cannot determine who received the money and how it was spent. Haiti received an amount almost equal to its gross domestic product, but several hundred thousand people remain in tent camps set up in the aftermath of the quake. Port-au-Prince still lacks good roads, electricity and safe drinking water. The problems that characterise the delivery of development assistance to Haiti are not unique – tracking exercises in other countries would probably produce similar results.

The situation in Haiti highlights the need for greater transparency, and we are hopeful that existing initiatives can be used to meet this goal. Particularly important tools for the donor community are the International Aid Transparency Initiative (IATI), a multi-stakeholder scheme with a standard for publishing information about aid spending, and Publish What You Fund’s aid transparency index.

Transparency is a critical step towards better project design and implementation in Haiti and other poor countries. Donors, NGOs, private foundations, private contractors and other civil society organisations must report to IATI and must do so in a timely manner. We can and should do a better job of helping people to regain control of their lives in the aftermath of disaster or conflict.

• Vijaya Ramachandran is a senior fellow, and Julie Walz a research assistant, at the Center for Global Development