The BBC’s Andy Gallacher in Port au Prince: “It is very busy and people are happy to be finally casting their ballot”

Haitians have been voting in the delayed run-off of the presidential election, amid an ongoing struggle to rebuild after last year’s earthquake.

The poll is being held just two days after former president Jean-Bertrand Aristide returned from seven years in exile in South Africa.

Final results are not expected until mid-April.

Haitians have a choice between two markedly different candidates: Mirlande Manigat is a 70-year-old academic and wife of a former president, while Michel Martelly, 50, is a singer and entertainer known to his fans as “Sweet Micky”.

They emerged after recounts and challenges as the top two from November’s chaotic first round, which was marred by violence and fraud.

Whoever wins will face a mammoth challenge. 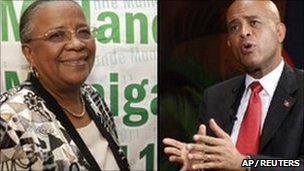 Haiti is struggling to rebuild after the devastating January 2010 earthquake, with some 800,000 people still living in camps.

The country has also been suffering a cholera epidemic that is likely to flare up again with the start of the rainy season in a few weeks.

International donors are looking for the next president to help restore some stability and be a partner they can work with.

One key factor will be how many of the 4.7 million eligible voters will cast their ballots. Only 23% votes in the first round, adding to the accusations of fraud.

Low turnout or even a boycott by supporters of Mr Aristide, who returned home on Friday, could undermine the poll’s legitimacy, correspondents say.

Speaking to hundreds of his supporters at the airport, Mr Aristide criticised the exclusion of his party, Fanmi Lavalas, from the elections, which are also for the country’s legislature. 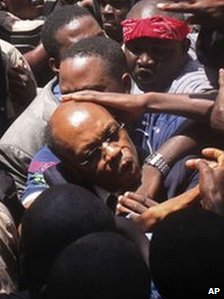 Mr Aristide received a tumultuous welcome from his supporters

“The exclusion of Fanmi Lavalas is the exclusion of the majority of Haitians,” he said. The party was barred apparently because of technical errors on its application forms.

The former priest, who was forced into exile in 2004 amid a rebellion, has said he will not re-enter politics and has so far not endorsed either of the candidates.

Under Haiti’s election law, the Provisional Electoral Council is due to announce preliminary results on 31 March, with the final results confirmed on 16 April.

The top United National official in Haiti, Edmund Mulet, acknowledged that the long wait for results could stir up rival supporters as each claimed victory.

However, Mr Mulet said he believed there would be a credible outcome.

“This is the first time in Haitian history that they will have a run-off election, a second round, so I think the product of this election will be a legitimate one that will have the support of the majority of the Haitian people and that alone is already an asset for the next government,” he told Reuters news agency.

Edmund Mulet, his MINUSTAH and OAS associates, along with Hillary Clinton have been openly backing Manigat.

It is an embarrassment how openly the foreigners are meddling with Haitian affairs. If Martelly wins, as he should, I hope he remembers these people.