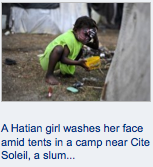 The attack on Tuesday in the capital’s sprawling Cite Soleil slum came with religious tensions rising, as Protestant Evangelicals and other denominations recruit in the wake of the earthquake that killed more than 200,000.

“It will be war — open war,” Max Beauvoir, supreme head of Haitian voodoo, told AFP in an interview at his home and temple outside the capital.

The quake also left more than a million homeless and left much of the capital and surrounding areas, in this Caribbean nation of more than nine million, in ruins.

Police said a pastor urged followers to attack the ceremony, resulting in a crowd of people throwing rocks at the voodoo followers.

Rosemond Aristide, police inspector in Cite Soleil, said he has since spoken with the pastor, who agreed to allow voodoo ceremonies to take place there.

However, Aristide could not explain why no arrests were made nor provide further details.

Beauvoir claimed hundreds of Protestant Evangelicals along with other people they hired attacked the ceremony, causing a number of injuries.

About half of Haiti’s population is believed to practice voodoo in some form, though many are thought to also follow other religious beliefs at the same time.

The religion — whose practitioners often use the vodou spelling as opposed to the Westernized version — is deeply rooted in Haitian culture.

A voodoo priest named Boukman has been credited with setting off the country’s slave rebellion in the late 18th century.