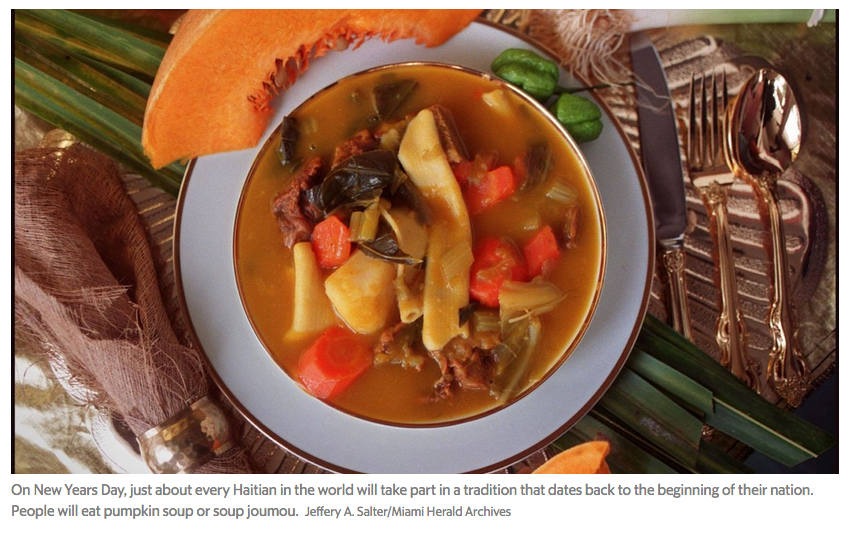 There is no shortage of food traditions to ring in the new year. There are black-eyed peas and popping 12 grapes with every chime of the clock. Then there is pumpkin soup, or soup joumou (pronounced joo-moo) to be exact.

For Haitians, this aromatic meal steeped both in tradition and vegetables is as much about celebrating the future as it is about paying homage to the past. New Year’s Day also happens to be Haiti’s Independence Day, which took place on Jan. 1, 1804. This Monday commemorates Haiti’s 214th year of independence.

While there are various stories about the soup’s origins, one widely held belief is that the soup was once only reserved for the French slave masters. Upon France’s defeat, freed slaves celebrated becoming the world’s first black republic by eating their master’s once forbidden food.

Today, the soup is not just the centerpiece of the New Year’s Day table in Haitian households, but it’s the main conversation piece as Haitians will inevitably be asked throughout the day, “Did you have your soup?”

So just what is in this pumpkin soup? Well, it depends on who’s cooking it.

For traditionalists, there is meat – in fact, lots of beef – along with generous portions of potatoes, leeks, carrots, celery, cabbage and pasta. Cooks usually spend hours, if not days, scouring the markets in search of squash that is similar to the Haitian pumpkin. Some even ask visiting relatives from Haiti to fly it in.

“The first thing you have to do is pick the right pumpkin,” said Chef Jerry Dominique, owner of KC Healthy Cooking, 11900 Biscayne Blvd., #103, in North Miami. “You don’t have to get it from Haiti.”

Dominique, who is no fan of the frozen squash, said fresh is always better. That includes any member of the squash family out of Haiti or Jamaica, for example, or even the Japanese winter squash, kabocha, which is green on the outside but yellow inside.

For this year’s independence soup, Dominique plans to offer up both a traditional version and one for vegans that comes with no pasta or meat. While some like to add blends of Haitian spices along with a whole scotch bonnet pepper, Dominique uses culantro to provide a sweeter taste, turnips, carrots, celery, onions and salt and pepper for taste.

Dominique serves up the soup every day at his restaurant. But there is something special about serving up this soup – which will be available until 1 a.m. on New Year’s Eve and between 7 a.m. and 2 p.m. on New Year’s Day – on Haitian Independence.

“It reminds me why as Haitians we should be proud,” he said. “I am always reminded of 1804; where we’ve come from, where we are and where we want to go.”

But while Dominique doesn’t go crazy on the spices, Dudley Alexis prefers hot pepper in his soup. Alexis is the South Florida filmmaker behind the documentary “Liberty in a Soup,” which was featured at last year’s Miami Film Festival and explores the relationship between the traditional soup and Haitian history.

“So much of our identity from the family aspect, the revolution, are all in the soup; what we survived, all of that is shaped around the soup and all of it is within the soup,” Alexis said. “When you’re drinking the soup, every single taste bud will come alive. You can taste everything, the sweetness of the pumpkin, a little bit of the spiciness, and all of the flavors.”

Like last year, fans of pumpkin soup will get a chance to have some fun on social media by voting for the best soup joumou. The contest is being run by South Florida-based Haitian-American blogger, Wanda Tima-Gilles. Tima-Gilles runs the popular social media platforms, L’Union Suite on Twitter and Instagram, and the Haitian American on Facebook.

“It’s a cool debate,” said Tima-Gilles who will be live streaming a soup joumou party and plans to flood followers’ timelines with Haitian facts and lots of images of soup joumou.

People get creative, she said, recalling one recipe where someone used salmon instead of beef and a vegetarian version that included tofu.

“We can’t wait to see what kind of new meat is in it this year,” she said.

As for her own version of the delicacy, Tima-Gilles admits that she still feels like she hasn’t thoroughly mastered the art of cooking soup joumou.

“You definitely need the noodles, and you’re not supposed to use the powdered pumpkin. You have to get the real pumpkin,” she said with a laugh. “But there is always an argument about the different types of noodles you use; the noodles are important and so is the joumou.”

No matter which version of the soup one eats, however, the feeling for many Haitians is the same on Jan. 1.