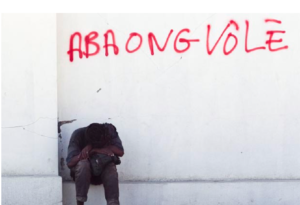 PORT-AU-PRINCE, Haiti — By any human standard, the sprawling tent city across from the collapsed National Palace in the Haitian capital remains a living hell.

Large families huddle in rickety shacks thrown together with tarps, sticks, twine — whatever can be scavenged. People bathe in the street with a bucket of water and a bar of soap. The stench of urine and excrement lingers. In camps like these, aid workers have been handing out “post-rape” kits to help women minimize the chance of unwanted pregnancies or contracting HIV.

But amid the squalor, there are signs of progress. Residents now use portable toilets, rather than relieve themselves in the gutter. Many dwellings have tarps for roofs, instead of ratty blankets or bed sheets. Yellow rubber “bladders” pump out clean water. Some have turned their homes into mini-supermarkets selling everything from coconuts to bottles of mustard and cooking oil.

Two months since the ground opened beneath them, Haitians are staggering to their feet. President Rene Preval, accused of being invisible in the days after the disaster, now speaks of an ambitious plan to decentralize the country and overhaul the economy.

Still, few Haitians on the street are convinced the government, even with the help of the international community, can deliver.

“The only thing that’s changed is there aren’t dead bodies on the ground,” says Maclaine Gay, a laconic 23-year-old who runs a makeshift Internet cafe within the Champ de Mars tent city, once the site of an impressive public park.

“People keep saying the government is going to do something, but I don’t believe it.”

The sheer scale of the UN-co-ordinated relief effort has been immense. Last month, the World Food Program distributed food to three million people. This month, the organization is concentrating on getting food to the most vulnerable, such as by giving nutrient-fortified meals to pregnant women and infants. Aid workers have provided shelter supplies — either two tarps or one tent — to more than 730,000 people. More than 300,000 have been vaccinated against disease, helping to fend off outbreaks.

In financial terms, the contribution has been sizable. According to the Centre for Philanthropy at Indiana University, Americans have donated more than $1 billion U.S. to charities to help the recovery. In Canada, an earthquake relief fund has raised more $154 million, of which the federal government has promised to match $129 million.

But for those on the ground, it barely feels like all that support is making a dent.

“We keep hearing things are supposed to get better, but we’re still waiting,” said Ludes Dorcely, 41. A few weeks ago, he spent his last $25 on a tarp. His flimsy shack isn’t much bigger than the mattress upon which he and his wife sleep.

He was studying law in the Dominican Republic before returning to Haiti to help his family. Now he just waits and prays.

“The man can forget about me but, if Jesus remembers me, he can change my day into night.”

Despite the tons of food that have been distributed, United Nations officials admit that seven in 10 people living in homeless camps don’t have enough to eat on a daily basis. Life could become even more miserable with the imminent arrival of the hurricane season, which officials fear could cause flooding in the camps and raise the risk of water-borne diseases.

To head off a crisis, people are being encouraged to return to their homes, provided the buildings get the green light from engineers. Other homeless individuals are being told to find a vacant plot of land or a host family. The Haitian government is identifying relatively low-risk camps where the land can be leveled and basic services — such as sanitation and health care — provided. The government has chosen five locations on the outskirts of Port-au-Prince where, as a last resort, the homeless will be resettled.

For many Haitians, the earthquake is simply the latest chapter in the country’s history of suffering. Haiti is the poorest country in the Americas, with an average per capita income of $5 U.S. per day. More than two-thirds of the labour force have no formal jobs and nearly half the population is illiterate.

There have been numerous false dawns throughout Haiti’s past. Under French rule, it became one of the most productive colonies in the world, earning it the nickname “Jewel of the Antilles.” In 1804, after revolting against slavery, it became the first black republic. The United States occupied the country between 1915 and 1934, a period that brought substantial advances in infrastructure. After the brutal dictatorship of “Papa Doc” Duvalier and his heirs, the election of Jean-Bertrand Aristide raised hopes that Haiti could become a stable democracy. But Aristide’s administration collapsed under a cloud of corruption, human-rights abuses and suspected foreign meddling, and he was exiled in 2004.

It is perhaps not surprising, then, that the government is somewhat skeptical of the foreign involvement in the recovery. Haiti’s prime minister, Jean-Max Bellerive, recently complained about a lack of accountability in how aid agencies are spending their donors’ cash.

Nor is it surprising that many Haitians are skeptical of the government’s rhetoric about a master reconstruction plan.

“The only thing the government people here do is drive around in big trucks and kick dust in your face,” said Emmanuel “Snoop” Delorme, another resident of Champ de Mars.

This week, Preval suggested relocation of residents of the capital to suburban and rural areas, while refocusing the economy on agriculture and tourism. Preval is also proposing that donor funds be placed in trust and managed by representatives from the Haitian government and the international community.

“Our vision is to remake Haiti,” Preval told reporters this week after meeting with Gov. Gen. Michaelle Jean. “If we don’t seize this historic opportunity to rethink the country, to rethink Port au Prince, we will have committed a grave and historic mistake. Our generation has the duty to assume this responsibility.”

The reconstruction plan, being developed with input from the United Nations and aid agencies, will be presented at a key conference of international donors in New York on March 31. The question is whether major donor countries, such as the United States, Canada and France, will agree to the hefty price tag. Preval says the plan will cost $14 billion U.S. in further aid. It is a risky proposition, given that the Haitian government consistently ranks as one of the most corrupt in the world.

The other question is whether foreign leaders have the political will, and the patience, to support a long-term rebuilding plan. Media interest in the earthquake is steadily waning, and foreign troops are heading home. By mid-April, Canada will have withdrawn most of its forces.

“We will need to see more money, obviously. But what’s most important is a comprehensive plan that the Haitians are on board with, that the international community is on board with,” said Carlo Dade, executive director of Canadian Foundation for the Americas. “The co-ordination is fundamental.”

On her visit to Haiti this week, the Governor General encouraged Haitians to move beyond mourning and start to rebuild. Her uplifting message nevertheless contained an urgent plea: this time, they must finally get it right.

“What we must ensure is that Haiti stops being a laboratory for failed experiments,” said Jean.

Why does everyone make their first trip to Haiti, listen to rumors the Haitians think they want to hear, and then print the usual garbage. If the lie is told often enough – it becomes truth.

We continually get the garbage about the brutal Duvalier dictatorship.  No one looks further than the rumour or asks the Haitian majority for their opinion. At this moment, the vast majority of Haitians pray for the return of Jean Claude Duvalier. The vast majority never pressed for his departure…it was the business community who really didn’t want law and order or controls. Under Duvalier there were real schools, a police force, investment, tourism, jobs and Hope.

QUOTE FROM ARTICLE:  “This week, Preval suggested relocation of residents of the capital to suburban and rural areas, while refocusing the economy on agriculture and tourism. Preval is also proposing that donor funds be placed in trust and managed by representatives from the Haitian government and the international community.”

Relocation is an insane process, unless the areas chosen for this are prepared first and Preval has made absolutely no effort to do this or, for that matter, anything else…other than to try and gain control over funds…so he can steal them

His record in the theft department is truly staggering, and the world community knows this.

The world community knows this and should give Preval nothing other than a quick push out of office and into prison.

Without this action Haiti will never be revived.