One day after marking the six-month anniversary of the earthquake that hit on January 12, demonstrators from some of the poorest areas of Port-au-Prince set at least one vehicle on fire, and erected barricades of burning tyres along city streets.

They brandished photographs of former Haitian presidents Jean-Claude Duvalier and Jean-Bertrand Aristide, who are both in exile. 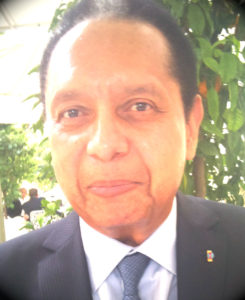 Police took up positions in front of the presidential palace, where demonstrators called for the electoral council organising legislative and presidential elections scheduled for November 28 to resign.

Reconstruction in the poor Caribbean nation has ground almost to a halt. Building cannot begin until rubble is cleared from the streets. But the city cannot afford professional equipment to remove rubble, as much international aid money is reserved for emergency relief.

The disaster prompted an almost unprecedented wave of donations from around the world, but billions of pledged dollars have yet to arrive.

Anti-government demonstrations died down in Haiti during the World Cup, but have returned quickly as the country marks the anniversary of the earthquake that killed at least 250,000 people, and left 1.5 million homeless.

Mr Preval’s mandate expires next February but several parties have accused him of seeking to stay in office.