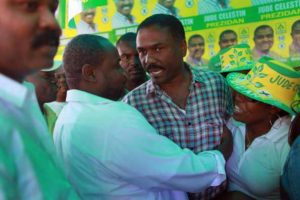 OAS report has suggested he should not be included in a runoff election
By JACQUELINE CHARLES
jcharles@MiamiHerald.com

PORT-AU-PRINCE — Haitian presidential candidate Jude Célestin is resisting pressure from his own political coalition to withdraw his candidacy and break an electoral impasse.

“Jude doesn’t agree,” Joseph Lambert, head of the INITE (UNITY) coalition told The Miami Herald. “We asked him to remove himself and he said, `I am not made that way. It is not part of my mental fabric.”’

A report by an Organization of American States team, which was formed after allegations of massive fraud in the Nov. 18 presidential election, suggests that a runoff election should be between former first lady Mirlande Manigat, who finished first, and singer Michel “Sweet Micky” Martelly, who finished third.

It arrived at its conclusion after reviewing 234 tally sheets out of more than 900 from the disputed elections. The report shows 50,000 votes had to be cast aside as either fraudulent or “irregular” votes.

Preliminary results released by the Haitian government had Manigat first and Celestin, the hand-picked candidate of President René Préval, second, with Martelly trailing by only several thousand votes.

Lambert said INITE “in principle” has agreed to ask Celestin to withdraw but is still wrestling with the matter.

Celestin, however, wants his day in court where his lawyers are working to prove that he does indeed have a right to advance into the runoff despite the OAS findings, said Lambert.

Celestin and his lawyer argue that the OAS report is flawed.

The report has been a point of contention between Haitian officials, who disagree with the results and methodology, and the United States.

Susan Rice, the top U.S. diplomat to the United Nations, last week warned Haiti that it could lose international assistance if it does not accept the OAS recommendations. But even the OAS has said that its recommendations are not results, but rather calculations, and they cannot be adopted until a phase for disputes is completed. Disputes are expected to be heard late Wednesday or Thursday.

Préval has personally held several meetings with coalition members to try and persuade Célestin to withdraw. But the candidate has not attended any of the meetings.

Meanwhile, Haiti is in a wait-and-see mode, and some have started to question what they perceive as “big-foot” diplomacy on the part of the United States.

“Everyone sees the hands of the international community in these elections,” said a frustrated Lambert. “They have law, but we don’t’ have laws? We are not a country anymore?”

He feels such efforts could trigger unrest. “They are inviting catastrophe after the departure of René Préval. Everytime we have a president leave office we have catastrophe,” he said. “And the people are the victims. My objective is to have a constitutional government replace this government in a ceremony. All of my efforts are to ensure President Préval finishes the end of his mandate.”