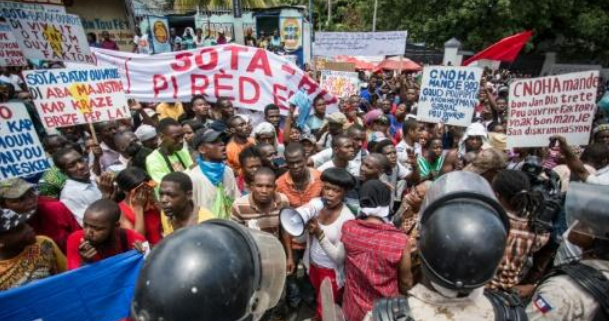 Port-au-Prince (AFP) – Hundreds of Haiti’s factory workers protested in Port-au-Prince on Monday against a small increase in the minimum wage set by the government.

The workers, paid 300 gourdes (4.75 dollars) a day, are demanding 800 gourdes (12.75 dollars) for an eight-hour day of labor making products in factories outsourced to foreign companies.

In a report published last week, the commission on salaries appointed by the government to tackle the wage crisis said the minimum daily salary could be increased by 35 gourdes, or 55 cents.

“Thirty-five gourdes, that won’t send our kids to school, that won’t pay the rent. Just getting from my home to the factory costs more than 35 gourdes,” said Patricia Joseph, heading the march, made up mostly of women.

“My message to (First Lady) Martine Moise is this: you are a woman, you know our suffering and you know that if we are out on the streets today protesting, 35 gourdes is not going to make a difference,” she said.

The workers movement sprang up in May after a dramatic rise in the price of fuel worsened inflation.

In a bid to shore up its disastrous public finances, the government announced a 17 percent hike in the price of kerosene, of 18.5 percent in gas prices and 20 percent for diesel, despite anger the move triggered among the country’s many poor citizens.

While the workers complained about what they called exploitation by their bosses, they had harsh words for President Jovenel Moise, whom they accused of selling them out.

“Jovenel is favoring the bosses who financed his campaign. That’s why he lacks the prestige needed to run the country. He is manipulated by the bosses who give him orders,” said protester Reginald Orel Lafontant.

“They want to satisfy the interests of the bourgeoisie, but the voice of the people is the voice of God and there are more of us than there are of them,” he said, insisting the protesters would not give up on their demand for 800 gourdes a day.