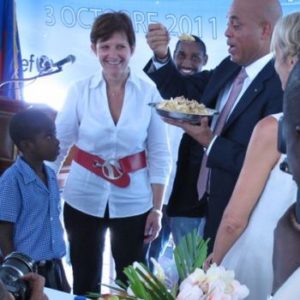 Several thousand people took to the streets of Cap-Haïtien, Haiti’s second largest city and the capital of North department, on Sept. 21 to protest a rise in the cost of basic foods and what they perceived as corruption and nepotism in the government of President Michel Martelly (“Sweet Micky”) and Prime Minister Laurent Salvador Lamothe. The day of protests was called by various grassroots organizations and local opposition politicians, notably Senator Moïse Jean-Charles of the Unity party of former president René Préval (1996-2001, 2006-2011).

Protesters set up barricades of burning tires in various streets, especially in the working-class neighborhoods of La Fossette, Samarie and Cité Lescot, blocking traffic in parts of the city. Confrontations broke out when Martelly supporters threw stones at the opposition protesters in Cité Lescot. For their part Martelly opponents were seen ripping the “pink bracelets,” a symbol of support for the government, from the arms of passersby. Agents of the Haitian National Police (PNH) and the United Nations Stabilization Mission in Haiti (MINUSTAH) fired in the air and used tear gas to disperse the crowds. Commercial banks closed down by 11 am, and public transport was delayed throughout North and Northeast departments. By the evening Cap-Haïtien’s streets were deserted as residents kept to their homes.

There had also been confrontations between police and protesters the night of Sept. 20-21, leaving two people wounded by bullets and one police agent injured by rocks, according to Departmental Director Carl Henry Boucher.

The day of protests in Cap-Haïtien on Sept. 21 was the second time this month that people used street actions there to express their dissatisfaction with economic conditions and with President Martelly’s failure to fulfill the promises he made during the 2010-2010 electoral process. A similar protest on Sept. 12 was called by a coalition of about 20 organizations, including the labor organizing group Batay Ouvriye (“Workers’ Struggle”), and was backed by Senator Jean-Charles. (AlterPresse, Sept. 13)

Adding to tensions over the economy, on Oct. 1 the minimum wage is set to rise for workers in the “free trade zones” (FTZs), the tax-exempt assembly plants producing for export, principally to the US and Canada. After a six-month struggle over wages in the sector, the Parliament passed a law on Oct. 6, 2009 raising the daily minimum wage to 200 gourdes (about $4.75 at current rates) for all industrial and commercial workers except those in the FTZs. The minimum wage remained at 125 gourdes ($3.00) for the assembly plant workers, but in a compromise the law stipulated that their minimum would rise to 200 gourdes this year. (We originally reported, following our source, that the raise took place in October 2010). Article 2.2 of the law raises the minimum further for workers paid by the piece in plants producing exclusively for export. In those factories “the price per unit of production (notably the piece, the dozen, the gross, the meter) should be set in such a way as to allow the worker to receive at least (300) gourdes [about $7.12] for his or her day’s work of (8) eight hours.”

The Martelly government noted on Sept. 19 that the new rates would go into effect on Oct. 1, but it remains to be seen whether businesses will obey the law and whether the government will enforce it. Meanwhile, the government has responded to rising prices by announcing the importation of 300,000 sacks of rice in order to drive down food costs. Several economists dismissed the move as cosmetic.

Cap Haitian is ready to explode. Thursday will see what is promised to be a much bigger anti-Martelly demonstration… and this movement is spreading throughout the country and people – who supported Martelly 85% – are now seeing him as less than an empty vessel.