Four years after the earthquake, I visited Haiti to record what progress had occurred, and how ordinary people are coping with endemic deprivation. 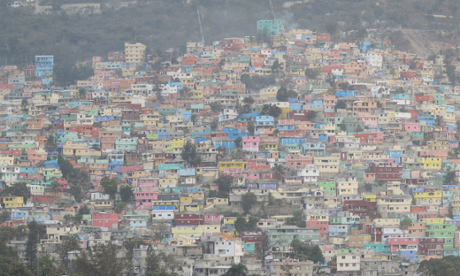 The mood in Port au Prince’s flashiest hotel was cautiously optimistic. A business conference was held this January at the Karibe Hotel with a range of local and international businesspeople. Called Restore Haiti, the event was held more than four years after the devastating 2010 earthquake that left the capital in ruins and killed up to 200,000 people. There, delegates heard about the myriad of ways to make money in the Caribbean nation.

One of the first speakers was George Andy Rene, managing director of the official body Investment Facilitation Centre. He repeated the popular government mantra since taking office in 2011: “Haiti is open for business”. “We need to counter the negative image of Haiti in the global media”, he said. However, Texan Christian entrepreneur Fred Eppright, of Bridge Capital, issued a blunt warning: the international image of Haiti remains dire and in desperate need of improvement. By all means support Haiti, he argued, but be aware of the risks.

A dynamic and increasingly thriving Haiti is one the US-backed government wants the world to see. President Michel Martelly and prime minister Laurent Lamothe, whose faces are plastered across billboards and propaganda material throughout the country, are close to the Obama administration and have benefitted from their association with Hillary Clinton when she was secretary of state. For example, some industrial parks were built thanks to US funds; the much-heralded one in the north of Haiti, at Caracol, has fallen far short of official expectations.

This doesn’t stop the US from continuing to push the tired and failing economic model of low paying textile factories to fill the stores of its own country; after decades of advocating the same ideas, without success, it shows the weakness of the Haiti state that its leaders continue to agree to it. A child in one of Haiti’s slum. Photograph: Antony LoewensteinAfter the 2010 earthquake, billions of dollars from across the world were pledged to the country and yet the vast bulk of this money never reached Haiti, remaining in the pockets of inefficient foreign contractors. As I documented in my 2013 book Profits of Doom, Haiti has suffered both decades of brutal dictatorship and Washington-based policies that alienated workers, slashed wages and cemented permanent poverty.

I returned to Haiti in January with New York film-maker Thor Neureiter to film footage for a documentary about disaster capitalism. I wanted to see what progress, if any, has occurred in the last years and how ordinary people are coping with endemic deprivation. Are they gaining from the government’s aggressive pro-business approach? Although there are undoubtedly signs of progress, including new housing, a modern airport and a private university, the vast bulk of citizens never experience any of it and told me government services are invisible to them.

Haiti is a nation that exists on two levels. Five percent of the country’s population owns the vast bulk of the nation’s wealth. The capital has a number of expensive hotels for the country’s elite, westerners and rich tourists. Attending the closing night of the Port au Prince International Jazz Festival, I saw a sea of expats, diplomats and wealthy Haitians partying in style. It felt like I was a million miles from the sea of shanty towns a few kilometres away, where hundreds of thousands of people live in tents. It’s hard to blindly celebrate knowing this stark fact.

Sexual assault and rape are key problems in Haiti’s slums. NGO KOFAVIV is a leading female-run organisation aiming to tackle it. The founders, Eramithe and Malya, lost their homes in the 2010 earthquake and lived for a time in a tent city. Today, they have countless men and women working in the camps to raise awareness of a rape hotline, counseling and women’s empowerment. Support from international donors is waning, with many looking for fresher disasters to assist. The lack of long-term funding and infrastructure is a constant complaint amongst a range of local charities and organisations. “The world remembers us only when we’re desperate, then moves on” is a refrain I heard a number of times.

Malya told me that there’s still a social silence around sexual assault in Haiti but that “the last years have seen authorities, including the police, starting to take the crimes more seriously.” One day I walked around the Kid refugee camp in the Christ Roi area of Port au Prince with KOFAVIV’s Georjhy. Thousands of citizens have been forgotten in this squalid area, remaining here for more than four years. KOFAVIV’s male and female agents walked across the dirty ground to distribute pamphlets and information to young women, telling them that they have rights, pointing out that they have somebody to call if in trouble, promising a sympathetic ear. It’s deceptively simple, but it’s a very effective tool for activists to use on the ground. 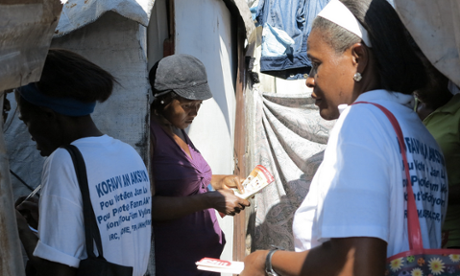 KOFAVIV activists talking to civilian women. Photograph: Antony LoewensteinWhen the United Nations allegedly brought cholera to Haiti in 2010, killing thousands of people – a plague that the international body does not acknowledge to this day – it seemed that the nation was doomed (the UN, aside from the military component, is also conducing a number of useful projects in the country).

But here and there, hope lives. Jerry Rosembert Moise is one of Haiti’s most provocative graffiti artists. His work appears across the country, including on walls in the exclusive Port au Prince suburb of Pétionville. He comments on the failing government, lack of opportunities for the youth and excessive and wasteful US aid. “We’re all looking for a better future”, he said to me.

One late night he found a bare wall and with a few cars passing by, started spraying a new artwork showing two men with their hands in each other pockets stealing money. It was, he told me, representative of modern Haiti, “a country where we all need to find a way to make a living and get ahead.” 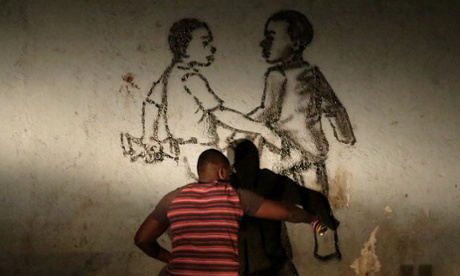 Jerry Rosembert Moise working on a graffiti in Pétionville. Photograph: Antony LoewensteinLike I found in Papua New Guinea in late 2012 – another country ruthlessly exploited by outside powers for the benefit of foreign corporations – Haiti regularly sees a new coat of paint slapped on its face to hide the grime. The sprawling slum of Jalousie, the terraced area in Port au Prince, was painted in a multitude of colours, “urban botox” style, to give a better view for the guests at a new upmarket hotel. That’s one way to view progress.

Although I saw a range of private and government programs attempting to provide better housing and employment opportunities for Haitians on this trip – for example, a Haitian-made tablet device by Surtab is an intriguing opportunity – the neo-liberal, exploitative economic model currently being imposed on the nation has failed many times before and leaves millions of citizens, many of whom I met and heard, in a state of despair and daily desperation.

• For a collection of Antony Loewenstein’s photos from Haiti, see here.