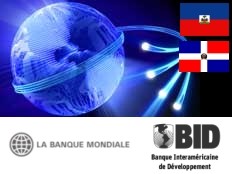 World Bank (WB) and the Interamerican Development Bank (IDB) proposes the creation of a submarine cable terminal (optical fiber) to facilitate access to the Dominican Republic and Haiti at the rest of the world.

The presentation of this project was made Tuesday in Santo Domingo [Dominican Republic] in the conclusions of the workshop “on the infrastructure and the connectivity of information technology for the local and regional development” by the experts Juan Navas-Sabater, telecommunications specialist, of the WB, and Silvana Rubino-Hallman of the IDB. This workshop was organized by the Dominican Institute of Telecommunications (Indotel), in collaboration with the IDB and the World Bank in collaboration with the Haitian Ministry of Labour and the National Council of Telecommunications (CONATEL) of Haiti.

In addition, the international experts have recommended the creation in both countries of a fiber optic Internet backbone at high density (Internet backbone) and the establishment of a virtual network to link among others: government agencies, schools, health centers and municipalities, this backbone will cross from South to North and from Port-au-Prince to Santo Domingo (West to East of the island) to be deployed on the Dominican territory.

The two banking institutions have announced their willingness to cooperate in an integrated solution for Haiti and the Dominican Republic and promoted the development of a legal and regulatory framework in both countries to boost the Information and Communications Technology (ICT) industries, their competitiveness and promote the economic development.

Noting the growth of the mobile telephony, they lamented the inequality of the development between the two countries and the low penetration of broadband high-speed, the limitation of international access and the lack of alternative routes, both submarine as terrestrial. Reiterating the need to stimulate the economic development, the World Bank and IDB have recognized the will of the Dominican Republic and Haiti to work on joint projects.

1 thought on “Haiti – Technology : Major Internet project for Haiti and the Dominican Republic”