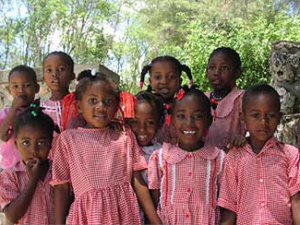 Haitians line up during a food distribution at the Cite Soleil neighborhood in Port-au-Prince February 15, 2010.

PORT-AU-PRINCE (Reuters) – Living in a tent after an earthquake left a million Haitians in the streets, Melila Thelusma says she cannot support her two daughters and is ready to give them away to foreigners if she can find a good home for them.

Despite her desperation, Thelusma said she would never turn 11-year-old Gaelle and 6-year-old Christelle over to a Haitian family, as tens of thousands of other poor parents have done.

“Not a Haitian family. Haitians will make them suffer,” Thelusma, 39, said. “They … force the child to work like a animal. They don’t really take care of them.”

Deeply ingrained in the culture of the impoverished former slave colony, the practice of poor families giving away children to wealthier acquaintances or relatives is known in the native Creole as “restavek,” from the French words rester avec, or “to stay with.”

The children, they said, are taken in as servants, forced to work without pay, isolated from other children in the household and seldom sent to school.

“A restavek is a child placed in domestic slavery,” said Jean-Robert Cadet, a former restavek who now runs a foundation to improve the lives of restavek children (www.restavekfreedom.org).

After the January 12 earthquake, the Haitian government warned that child traffickers could take advantage of the ensuing chaos to prey on vulnerable children. The well-publicized drama surrounding 10 U.S. missionaries caught trying to spirit 33 children over the border seemed to reinforce the threat.

But critics say tens of thousands of Haitian children have been freely given by their own parents to a life of slavery within Haiti.

A 2002 study for UNICEF and other organizations by Norway’s Fafo Institute for Applied Social Science said there were 173,000 restavek children, more than 8 percent of the population between 5 and 17. Cadet believes there are more than 300,000.

“When I was a child, the family basically owned me,” said Cadet, whose mother died young. He was given away to a wealthy family when he was four.

“I grew up sleeping under the kitchen table. I got up early, swept the yard, washed the car, fetched water, emptied the chamber pot. I went to the market, bathed the children, walked the children to school and I couldn’t come to school,” he said. “I never ate with the family. I was abused physically. I was abused emotionally with bad words.”

The restavek tradition may date to the time when Haiti was a French slave colony, when the children of slaves worked as domestics in the home of the master. Cadet said a relic of that era, a twisted cowhide whip known in Creole as a rigwaz, is still used to beat restaveks.

“It’s the same whip that the French used during colonial times to beat slaves,” he said. “You can buy them in the markets (in Port-au-Prince) today.”

The restavek tradition lives on in part because it is accepted, or at least tolerated, in Haitian culture. Some families school and feed their restavek children, and some argue the children would die if they remained with their poor parents.

A family that has taken in a restavek child, Cadet said, will never admit to mistreating that child, and the government is reluctant to interfere in domestic affairs.

Marie Regine Joseph Pierre calls her 16-year-old charge, Rosaline, her cousin, and says she took in the girl when she was eight.

Rosaline lives “like brothers and sisters” with Pierre’s own children, she says, and goes to school.

“My behavior with them, it’s like a mother,” she said.

Expatriates have carried restavek traditions to the United States, Two years ago, a mother and her adult daughter were convicted in Fort Lauderdale, Florida, of keeping a Haitian teenager as their slave for six years.

The girl, Simone Celestin, described in court how she was beaten, forced to sleep on the floor and bathe from a bucket.

Although Haiti is a signatory to the United Nations Convention on the Rights of the Child, Caroline Bakker, a child protection adviser for UNICEF, said it has no laws to protect restavek children.

Haiti needs new laws to protect children in domestic servitude from illegal labor practices, as well as social service programs to help parents who might otherwise give their children away.

“It should go hand in hand, protection and criminalization,” she said. “Set up programs … so that those families are able to keep those children with them, in their family, so that they can go to school (and) have a normal life with their families.”

Jean-Robert Cadet said he sang along with his host family at the birthdays of their children, but never knew how old he was and believed that restaveks did not have birthdays.

“It’s like a restavek child is not really a person. It’s almost like you are disposable cloth,” he said. “They use you and they throw you away.”

(Editing by Tom Brown and Doin)

Jean-Robert Cadet had made a living out of his claim to have been a restavek, without ever presenting any actual proof that this is true.

I would appreciate it if he could provide me with the name of the family that enslaved him, along with three or four others who could substantiate this. We will check the facts out and report them here.

If his life was as terrible as he has described it – often bringing tears to the eyes of naïve American/Canadian audiences – he would not be where he is.

If the concept of restaveks was legally banned tomorrow, many children would be the worse for it. Haitian society is not American/Canadian society  and should not be judged on the basis of these advanced cultures.