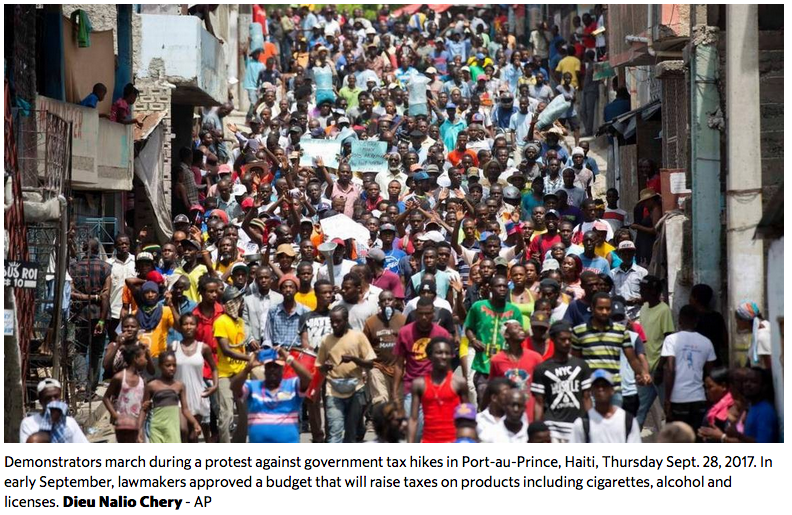 Haiti’s government has written to the Trump administration to formally ask for an 18-month extension of temporary protection from deportation for thousands of Haitians living in the United States.

The request, delivered Friday to the U.S. Department of Homeland Security, was written by the country’s ambassador to the United States, Paul Altidor, on behalf of Haitian President Jovenel Moïse. It includes an invitation to acting DHS Secretary Elaine Duke to visit Haiti before the decision next month on whether to extend the designation, called Temporary Protected Status or TPS, for nearly 60,000 Haitians.

TPS for Haitians is set to expire Jan. 22. A decision on extension is expected in November, possibly along with a decision on TPS for some Central Americans, who are also up for renewal.

“A visit to Haiti would offer you insight on the challenges that we continue to face,” Altidor wrote. The country, he said, has faced several devastating blows — including flooding from Hurricanes Irma and Maria — since the initial designation in 2010 after Haiti’s deadly earthquake.

“The detrimental impacts of the recent hurricanes have complicated our ability to recover from the 2010 earthquake,” he said. Cholera and Hurricane Matthew…have exacerbated the situation on the ground, resulting in major disruptions of living conditions in the short term.”

In May, DHS extended Haiti’s TPS designation for just six months, arguing that conditions in the country had improved since the quake left 300,000 dead and 1.5 million homeless. Then-DHS Secretary John Kelly, who is now President Donald Trump’s chief of staff, said DHS would re-evaluate the designation ahead of the January expiration date but said he had warned Moïse to prepare to bring his people back from the U.S.

Fears over the program’s end and a subsequent return to Haiti have caused panic for some in the Haitian community. Earlier this summer, thousands of Haitian TPS recipients and others with temporary work authorizations fled illegally to Canada across the New York state border, overwhelming Canadian authorities.

Concerned about the illegal migration, Altidor ramped up the government’s outreach. He’s had discussions with DHS, the State Department, White House and members of Congress on both sides of the aisle about the need for an extension.

In recent weeks, Haiti has been engulfed in protests over tax hikes, with massive and sometimes violent street demonstrations. Some protesters are even demand that Moïse step down. He was inaugurated in February.

On Thursday, during the confirmation hearing for Trump’s nominee for U.S. ambassador to Haiti, Michele J. Sison, Sen. Marco Rubio, R-Fla., asked Sison what the implications for the Haitian government would be if TPS is not be extended. Sison didn’t really answer, focusing her response more on the process of TPS designation and the U.S. helping to build resilience with its Haiti programs.

“I think it would be difficult for them to absorb it,” Rubio said. “But if that’s the decision, the administration makes, — which I hope they do not — if they did, my view is that the embassy will have a lot of work on its hands and the government of Haiti will require a lot of assistance.”