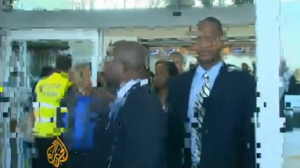 A 19-year-old Haitian man who has accused six Uruguayan soldiers of raping him while serving with the UN’s peacekeeping mission to the country will testify on Thursday to a judge who is investigating the case.

Al Jazeera’s Teresa Bo, reporting from Montevideo, said the case was well-publicised in Uruguay, making the front page of all the main newspapers.

“Of course, the case is something that many people are participating in, and there is a lot of embarrassment in the country over [the rape allegations],” she said.

Oxandabarat said the testimony was part of the judicial investigation into the allegations.

Our correspondent said: “What we know is that he arrived here on Wednesday. He was clam and he said he was not afraid. Today, he is going to be interrogated about the incident and meet the men who allegedly abused him.”

Jean, who has spoken to Al Jazeera about the alleged attack, says he was sexually abused last year at a UN base in the town of Port Salut by six Uruguayan marines serving with the MINUSTAH mission.

The defence initially called the incident as a prank that got out of hand, angering many Haitians who already had been demanding a departure by all UN peacekeepers.

In a preliminary investigation, the UN and Uruguay’s navy determined that the man was not raped, but said peacekeepers broke rules.

Oxandabarat said the next steps in the case would depend on Jean’s testimony.

“The judge will listen to him and allow the different parties to question him again. Then, we’ll see what happens,” the spokesman said.

The marines were sent back to Uruguay after the incident and held in prison for several months.

They were released in late 2011 pending the investigation and a military trial.

The 12,000 strong UN mission in Haiti was established by the UN Security Council in 2004 to provide stability after a rebellion forced President Jean-Bertrand Aristide out of office and into exile.

The UN force is unpopular with many Haitians. A cholera outbreak in October 2010 that was reported to have been introduced by a battalion from Nepal provoked riots and protests over the UN’s presence in the country.