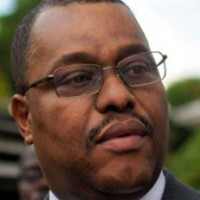 PORT-AU-PRINCE, Haiti (defend.ht) – Prime Minister Garry Conille will lead a delegation of Haitian officials to Washington, D.C. on Sunday for a five day mission to meet with members of the U.S. congress and international financial institutions.

Accompanying executives include the Minister of the Economy and Finance, Georges André Lemercier, Minister for Women, Yanick Mézile, the Executive Secretary for the Prime Minister, Jean Max Bazin and Counselo Tatiana Wah.

Jourlists from Le Nouvelliste will accompany the delegation, Frantz Duval and Gary Cyprian.

Meetings are expected to be held with Senator Patrick Leahy (D-VT), Chairman of the Senate Judiciary Committee, Senator Mary Landrieu (D-LA), Chairwoman of the Senate Committee on Small Business and Entrepreneurship and Senator Ben Cardin (D-MD) .

The delegation will lastly meet with a community of non-governmental organizations at the OXFAM headquarters.