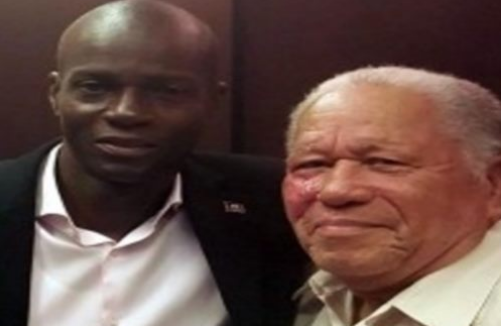 Namphy had replaced former president Jean-Claude Duvalier in February 1986 as head of the National Council and after handing over power to Leslie Manigat in 1988, he staged a coup in June that same year.

But Namphy was himself the victim of a coup in September of the same year and since then has been living in the Dominican Republic and has never returned to Haiti.

Moise, who ended a three-day visit to the Dominican Republic on Wednesday, told reporters that he had met with the former army general as well as businessman Marc-Antoine Acra and extended an invitation to his inauguration.

“These are Haitians. It is normal, as president of the Republic, to meet all Haitians. There is no Haitian that I will not meet,” he said.

“I am the President of all Haitians without distinction,” Moise, 48, said as he confirmed the invitation had been extended to Namphy.

With regards to Acra, who is wanted by police on drug related matters, Moise, who won the presidential elections last year, said that while “justice must do its job, I did not meet Marc-Antoine Acra in a prison and I am the President of all Haitians”.

Meanwhile, Economy and Finance Minister Yves Romain Bastien, said he would soon be tabling in Parliament, legislation regarding the financing of elections.

Political observers said if the Bill is ratified by both Houses, all future elections in Haiti will be financed by the Treasury.

Earlier this month, the government said it would be providing at least US$6.7 million more to the Provisional Electoral Council (CEP) and the police as they prepare for the January 29 second round of legislative elections.

The CEP spokesman Nicole Siméon, said a first shipment of “sensitive” material for the elections was due here on Thursday with a second shipment expected on Saturday.

The CEP has said that campaigning for the second round for a third of the Senate, the local elections (CASEC, ASEC, City Delegates) and the additional election for the Communal Section of Fond Cochon in the constituency of Roseaux, will end on January 27, two days before the polls.

COMMENT: HAITIAN-TRUTH.ORG
More misinformation.
Namphy didn’t head a coup.
Duvalier left control in his hands as head of the CNG, a government that controlled Haiti and prepared for elections.