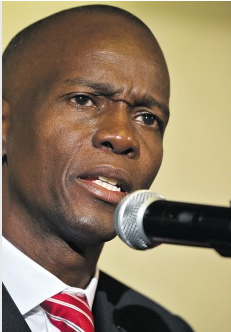 Elected President Jovenel Moise of PHTK political party gives a speech in the commune of Petion Ville, in the Haitian capital of Port-au-Prince on January 3, 2017. (Photo: AFP)
PORT AU PRINCE, Haiti (CMC) — President Jovenel Moïse has called on the competent authorities to investigate “as soon as possible” a crash that occurred on Sunday resulting in the death of 34 people and injuring 17 others.

Police said that the accident occurred when a bus slammed into a crowd in the city of Gonaives, north of here.

In a statement, Moise said he was dismayed by the “terrible accident” and expressed his “deep sadness.

“The head of state conveys, on behalf of the Government, his sincere condolences to the families and relatives of the victims of this too much drama on our national roads,” the statement noted.

It said that President Moïse, while urging road users to be vigilant, has called on the competent authorities “to investigate as soon as possible [the accident] to shed light on the tragedy.”

Meanwhile, the Civil Protection Coordinator for the Artibonite Department, Faustin Joseph, said that people who were not victims of the crash tried to burn the bus with the passengers inside.

He said that following the intervention of the police, the bus, his passengers and his driver were taken to the police station of Gonaïves.

The bus was travelling from Cap-Haitien to Port-au-Prince at the time of the incident.

COMMENT: HAITIAN-TRUTH.ORG
The investigation must go further than this specific incident, and the additional one in which a later bus was attacked, putting some of its passengers in hospital.
There is absolutely no police presence on the highways of Haiti.
Badly maintained vehicles, transporting people and produce, travel at “terminal velocity” without comment. You can be driving along at 50 MPH – maximum safe for that road – only to be passed by a huge truck loaded with people, bags of charcoal, goats and chickens. 4 or 5 guys are perched on the top of the cargo as the vehicle – probably with bad brakes – hits 70 MPH…. perhaps 80.
Major accidents are frequent.
Vehicles in dangerous condition.
The Police – PNH – should mount patrols on the highways and stop this dangerous speeding. It is a simple police duty, but no one does it.
Because of this, Haitians will continue to drive, with the throttle wide open – and people will die.