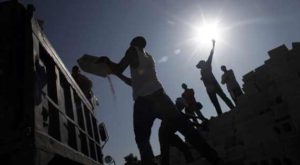 GEORGETOWN, Guyana — Haiti President Michel Martelly has urged the United Nations to divert some of the billions of dollars it spends yearly on peacekeeping efforts to infrastructure projects, job creation and poverty alleviation.

Officials need to think about sustainable development instead of security in the impoverished country that is still recovering from a devastating earthquake in 2010, Martelly said late Thursday while visiting Caricom’s headquarters in Guyana as the Caribbean trade bloc’s current chairman.

Martelly said the economic boom that Haiti needs should come from developing the country’s human resources instead of relying on donations or handouts.

“It is not about aid, but about trade,” he said.