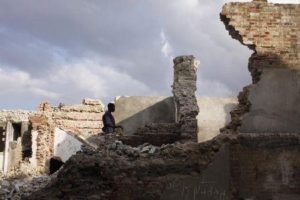 A Haitian man pauses while collecting bricks from a building destroyed by the January 2010 earthquake in Port-au-Prince January 7, 2011. REUTERS/Eduardo Munoz

PORT-AU-PRINCE (Thomson Reuters Foundation) – Five years after an earthquake flattened much of Haiti’s capital Port-au-Prince and destroyed Guiyolette Fenfen’s home, the 29-year-old is still living in a tent, still dreading the next hurricane season.

Facing the city’s ruined cathedral, the tent she shares with her husband and two children is one of hundreds assembled from bed sheets, tarpaulin, wooden sticks and string.

“I thought I’d live in a tent for just three or four months. But I’m still here,” said Fenfen, sitting under the canvas in the sweltering heat. “I can’t afford to rent, let alone ensure my children eat every day,” she said.

While the number of people living in makeshift shelters has dropped by 94 percent, 79,000 people like Fenfen are still living in Port-au-Prince’s squalid tent camps.

The United States and the United Nations have expressed concern that the Caribbean state is on the brink of political chaos over long-delayed elections.

Demonstrators, accusing the government of corruption, have demanded that Lamothe and Martelly resign and elections be held.

Municipal polls and elections for a third of the Senate’s seats were meant to have taken place in 2012.

“I think if the funding is there, if there’s political stability, if the hurricane season is not too disruptive, then yes, within 12 months we could close down all the tent camps,” Goodstein told the Thomson Reuters Foundation in an interview at his office in Port-au-Prince.

As donor funding and interest in Haiti’s reconstruction have waned, few of the remaining 105 tent camps spread across the capital have adequate supplies of drinking water, enough toilets and proper waste disposal.

“The water supply stopped in 2012,” said Fenfen. “But what’s worst is living here during the hurricane season. The tent floods and it collapses in the wind.”

The hundreds of millions of dollars in foreign aid to Haiti, the poorest country in the western hemisphere, have not resulted in as many new, permanent brick homes as Haitians had hoped for.

Although there are signs of reconstruction with some roads now paved and luxury hotel chains and new offices sprouting up across Port-au-Prince, aid agencies estimate a shortage of 500,000 homes in the capital.

In addition, most of the temporary shelters, built for around 114,000 of those who became homeless after the earthquake, were only meant to last five years.

On the other side of the capital, Marie Eveline Lielin, a single mother of two, is one of the lucky ones.

After enduring a tent camp for three years, she now lives in one of 45 pastel-colored two-storey homes, built last year in the Carrefour Feuilles neighborhood with international aid.

The houses were given to those landowners whose homes had been destroyed by the earthquake, provided they gave free lodging to a displaced family for three years.

“Now when it rains I don’t have to worry anymore. I’m very lucky to be here,” said Lielin.

But housing developments like these are few and far between.

In a desolate area on the capital’s outskirts sit rows of box-like rental homes, 3,000 houses built with Venezuelan aid in 2013 as part of the Lumane Casimr Village housing project.

Nearly 20 months on, scores of the homes are still empty. Critics say the houses were built without first providing the infrastructure needed, such as roads, shops and schools.

Other resettlement schemes being run by the Haitian government, the IOM and other international aid agencies include the offer of a one-off payment of $500 – the equivalent of a year’s rent – if families can find a safe place to live.

Back in her airless tent, Fenfen wonders when her turn will come to move into a rented room.

“Every day I wait to get selected,” she said. “I keep hoping.”