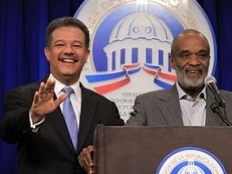 Haiti Libre:Haitian President René Préval traveled yesterday Saturday in the Dominican Republic. He arrived at 1h20pm in a UN helicopter at the helipad of the National Palace in Santo Domingo, where he was welcomed by the authorities before being taken in the Oval Office. René Préval was accompanied by Prime Minister Jean-Max Bellerive, and the Dominican ambassador in Haiti, Ruben Silié and Senator Carlos Castillo.

This surprise visit of four hours, comes at a time where the political crisis that affects Haiti is exacerbated by the presence of former dictator Jean Claude Duvalier and the demand of former President Jean Bertrand Aristide, for his return in the country. René Préval came to discuss of the political situation in Haiti and other issues of importance in the framework of bilateral agreements like the cholera epidemic and migration issues.

President Préval told the press that he has “often” telephone conversations with President Fernández but he wanted this time, come personally meet with the President that he called a “friend”.

After the meeting, President Fernández said that the meeting had provided a better understanding of the electoral situation and the deadlines for the transfer of power, originally scheduled for February 7, 2011. “We exchanged with President Préval some ideas that may help resolve the electoral crisis in Haiti, on the pitfalls and challenges that Haiti faces in the legitimate process and how to avoid an absence power.” Fernández said that the electoral process in Haiti was awaiting the decision of the Provisional Electoral Council (CEP), “The Haitian Electoral Council has until Jan. 31 to announce its decision on the results of elections and the verifications made by the Organization of American States (OAS), and then determine whether there will be a second round.” He noted that if the CEP decides to hold a second round, it will probably be next March. Fernández has denied rumors circulated in the press, which saw in the visit of President Préval, a possible application for political asylum.

President Préval said that “Duvalier had the right to return in the country because the constitution does not recognize the exile” but he must also face justice. He clarified that the former dictator was not in prison because he had not yet been judged or convicted. Stating that Mr. Duvalier “is in a house under surveillance and is prohibited from leaving the country”. Remember that 6 complaints were formally filed against Jean Claude Duvalier and a judicial process must assess the admissibility of these complaints (involvement of Jean Claude Duvalier) the evidence presented, the initiation of any investigation (investigation of the case) to result if necessary, to inculpations.

Concerning the return of former President Jean Bertrand Aristide in exile since 2004 in South Africa, President Préval made a surprisingly brief statement, saying “this does not depend of my decision”. If the eventual return of Aristide is not the decision of the President of Haiti, we wonder which authority, superior to the sovereignty of Haiti has this power ?