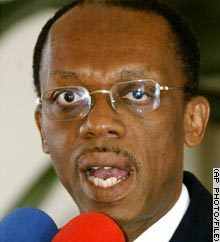 16/02/2011 10:02:10 Haitilibre
In the lobby of the hotel Karibe, in Pétion-Ville, the two candidates in the second round of elections, Mirlande Manigat and Michel Martelly, who had just left the closed meeting of the Interim Haiti Recovery Commission (IHRC), were questioned on the likely return of former President Jean-Bertrand Aristide.

Michel Martelly has estimated that Mr. Aristide had perfectly the right to return to his country stating that “if there was a problem with that, the justice system will take care of it” adding that his priority was the preparation of the second round of the election.  Mirlande Manigat made similar comments stating that “Jean Bertrand Aristide had as much right to return as Jean-Claude Duvalier, Haiti is currently in Haiti”. However, she clarified that the presence of former President Aristide in Haiti could create a problem, adding that “the authorities should deal with it” .
Both candidates seemed to suggest that Aristide might face legal problems with a return.

1 thought on “Haiti – Politic : Return of Aristide, common position of the two candidates”