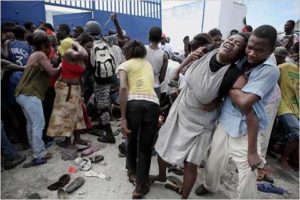 PORT-AU-PRINCE, Haiti—Haitian police and U.N. peacekeepers have begun cracking down on bands of armed men lobbying for the country to restore its armed forces, a U.N. spokesman said Monday.

Lt. Cmdr. Jim Hoeft said U.N. troops and national police officers set up checkpoints Sunday in Haiti’s capital and others parts of the country and detained two armed men in downtown Port-au-Prince wearing military fatigues. They were then taken to a police station.

The effort aims to discourage an illegal group of armed men from parading around Port-au-Prince in military uniforms as if they were on patrol. The lightly armed men have been seen directing traffic and even sweeping streets.

“These checkpoints were set up because there’s a stability issue with a proclaimed armed force that hasn’t been officially created by the government of Haiti,” Hoeft said by telephone.

Despite repeated orders from the government of Haitian President Michel Martelly, the men haven’t stopped carrying their weapons or cleared out of several former military bases they took over three months ago.

Led by a group of veterans, they hope Martelly will honor his campaign proposal to restore the armed forces, which were abolished in 1995 because of their abusive past. They also want to lead an interim force until Martelly formally establishes the military.

Foreign diplomats have opposed restoration of the military, saying money should go toward the understaffed police force and rebuilding following the 2010 earthquake.

The armed men have become an embarrassment to the Haitian government and the United Nations. Their military-like presence summons uncomfortable memories of private militias that worked on behalf of earlier administrations.

Yves Jeudy, a former sergeant and one of the leaders of the armed group at a base outside Haiti’s capital, confirmed that police and the U.N. troops detained two of the men but didn’t have any other details.

1 thought on “Haiti police, UN crack down on would-be soldiers”