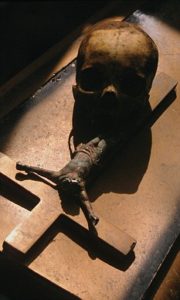 PORT-AU-PRINCE, Haiti –  An aide to Haiti’s prime minister has been slain in a drive-by shooting by two masked men on a motorcycle, the government said Monday.

The office of Prime Minister Laurent Lamothe said in a statement that Georges Henry Honorat was killed Saturday evening at his house in the Delmas district in Port-au-Prince. He was 55.

Police spokesman Gary Desrosiers said Honorat was shot twice outside his home when the men drove by. He died at the scene.

Detectives opened an investigation and collected bullet casings but have not publicly mentioned a motive.

Honorat also worked as the editor in chief for the weekly newspaper Haiti Progres and was secretary general of the Popular National Party that opposed the regime of Jean-Claude “Baby Doc” Duvalier and his father Francois.

A colleague of Honorat’s said the newspaper had been receiving constant threats from anonymous people on their cellphones. He added that he believed “popular organizations” — or grassroots groups — may have been behind the killing but declined to name them.

“Finally, they made the threats a reality by execution,” said Emmanuel Saintus, an editor for Haiti Progres, a partisan newspaper with offices in Port-au-Prince and Brooklyn, New York and is distributed in both cities. “They accused us of being a mouthpiece for the government.”

Another colleague, Lionel Lafortune, described Honorat as “a true patriot” for Haiti.

“He sacrificed his life for Haiti,” said Lafortune, a photographer for the newspaper.

The slayings of government officials often occur during electoral seasons, but have been rare of late.

In 2008, Honorat said two journalists who worked for Haiti Progres were killed in an outbreak of mob violence in northern Haiti as they considered campaign runs for the Senate. A spokesman for the United Nations peacekeeping mission in Haiti said a mob killed two men suspected of helping to steal more than $1,800 from an informal credit union.

The vote seeks to fill 10 vacant seats in the 30-member Senate and scores of local posts.

In the absence of elections, Haiti has seen the replacement of some 130 elected municipal governments with presidential appointees, according to the U.N.

It will be the most complex election that’s been organized in Haiti since 2006, and some 35,000 candidates are poised to run, the U.N. says. Violence is expected. In the past, it’s been the local elections that are the most vigorously contested.