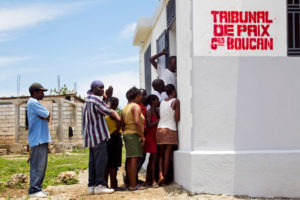 Haitians stand outside the Tribunal de Paix building in the town of Grand Boucan in May 2012. UN Photo/Victoria Hazou

21 February 2013 – A senior United Nations official today urged Haiti to ensure there is no impunity for human rights violations committed during the presidency of Jean-Claude Duvalier, who is scheduled to appear in court on Thursday.

Serious human rights violations, including torture, rape, and extrajudicial killings have been extensively documented by Haitian and international human rights organizations to have occurred in the country during Mr. Duvalier’s 15-year rule, according to the Office of the UN High Commissioner for Human Rights (OHCHR).

“Such systematic violations of rights must not remain unaddressed,” said High Commissioner Navi Pillay. “All those Haitians who suffered such abuses have a right to see justice is done.”

Last month, a judge ruled that Mr. Duvalier would be prosecuted for corruption charges but not for human rights abuses. The decision was appealed, and the court will decide in the next few days whether the decision still holds.

“I encourage the judicial authorities to act on their responsibilities and ensure the victims are provided with the long overdue justice they deserve,” Ms. Pillay said, adding that there is no statute of limitation under international law for serious human rights violations.

Human rights groups have long called for Mr. Duvalier to be arrested in relation to rights abuses carried out during his rule. The former president made a surprise return to Haiti in January 2011, after 25 years of exile in France and amidst a political crisis in his country.

Soon after Mr. Duvalier’s return, OHCHR offered Haitian authorities technical assistance for prosecuting crimes committed from 1971 to 1986 when he was in power.

UN High Commissioner Navi Pillay is one of those fanatically left-wing fools who see no wrong in the presidencies of Jean-Bertrand Aristide, or Rene Preval, while focusing on the non-events of the Jean-Claude Duvalier term of office.

She demands:  Haiti must ensure justice for victims of past human rights violations – UN official…. and this is a valid request which muct be applied evenly. Aristide and Preval must be judged for their many, many, many murders and crimes against humanity. Let’s hear this UN fool stand up for everyone.

Duvalier’s period in office was one with law and order, investment, schools that functioned, investment, tourisms and HOPE.

Here is a short  quote from Ambassador Ernest Preeg’s  HAITI AND THE C.B.I.: A TIME OF CHANGE AND OPPORTUNITY, 1985

“Jean-Claude Duvalier is considered by almost everyone, including his detractors, as a person of gentle demeanor, alien to violence that characterized his father’s presidency…… in fact, the general absence of government-inspired violence, plus the extremely low level of crime, in Haiti, stood in sharp contrast to the concurrent killing and civil disorder prevalent in Central America and elsewhere in the world…”

Let us judge the guilty and leave the innocent alone.