BBC: Five candidates who were defeated in the first round of Haiti’s presidential election have given their support to pop singer Michel Martelly in the second round run-off.

The five candidates said Mr Martelly was the candidate most likely to promote democracy and development.

But they said the best solution would have been to annul the first round because of widespread fraud.

In a joint statement, defeated candidates Josette Bijou, Wilson Jeudy, Genard Joseph, Chavanne Jeune and Eric Smarki Charles praised Mr Martelly for the “spirit of openness” he had shown in his campaign.

“We urge all our supporters in all corners of the country to go out and vote in mass for Michel Martelly to become president on Sunday 20 March,” the statement said.

But the candidates added that the “best solution for democracy” would have been to annul the “mascarade” of the first round. 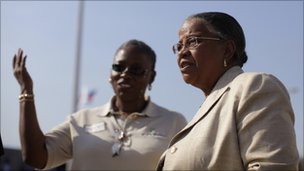 Mirlande Manigat won the most votes in the first round

Ms Manigat won the most votes in the first round, but opinion polls give Mr Martelly a slight lead ahead of next weekend’s decisive vote.

The election to chose a successor to outgoing Haitian president Rene Preval has been mired in controversy.

International observers said the first round on 28 November was marred by fraud and intimidation.

The second round was postponed, and experts from the Organisation of American States were called in to assess the result

They found there had been large-scale fraud in Mr Celestin’s favour, and recommended he withdraw.

After sustained international pressure, the electoral authority announced new results which put Mr Martelly through to the run-off against Ms Manigat.

Whoever wins the election faces the task of rebuilding Haiti after last year’s huge earthquake, which killed around 230,000 people and left the capital, Port-au-Prince, in ruins.

They say Manigat got the most votes but, in reality, she was near the bottom of a ballot rigged by Preval.

In real polls, before the November 28 vote, she had something like 4.5% and this is why Preval picked her to win his fixed fiasco.

Let’s have a truly fair ballot, properly counted, and we will she how little popularity this self-proclaimed intellectual has.

In a fair ballot she would end up behind dog catcher.

The International Community is trying to fix the election – again…just as they did with Preval who managed 23% in the vote, not 51%. MINUSTAH declared him winner in order to have a puppet and avoid a run-off.

So much for Democracy.