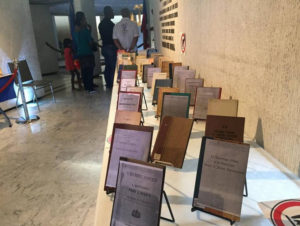 They landed a century ago this month, brandishing guns and hoisting the stars and strips on government buildings in a foreign land.

It would be 19 years before Old Glory would come down, and Haiti’s bicolor red and blue flag would fly again.

While many in this struggling nation are too young to remember the years, 1915 to 1934, that marked the first U.S. invasion of Haiti, the occupation remains a complex, and for some, a vexing period in Haitian history.

“Haitians like the U.S. visa to travel, but they don’t like American interference in their politics,” said Jean-Junior Joseph, a political blogger who once served as spokesman for the U.S. backed interim government that led Haiti between 2004 and 2006.

On Monday, Junior was among a handful of Haitians who attended a conference at the national pantheon museum as part of a monthlong series of activities aimed at commemorating the day the U.S. marines landed in Port-au-Prince, July 28, 1915.

Inside the museum, 56 books about the occupation are on display, the titles underscoring the resistance marines found in an unstable Haiti after a mob mutilated the body of then-Haitian President Vilbrun Guillaume Sam. Sam had ordered the deaths of 167 political prisoners, and U.S. President Woodrow Wilson reasoned that U.S. financial interests and citizens needed protection.

But instead of protecting Americans, soldiers were soon calling the shots, accused of abuse and racism, and leaving their footprint on almost all aspects of Haitian life and politics.

“It’s during the occupation that Haitian women learned about going to the beauty salon,” said Pierre Buteau, a historian and former education minister.

Despite such influences, including modern roads and infrastructure, Buteau said the “modernization left by the Americans was fake. It was a modernization that was archaic, that didn’t have an output to development.”

Among the displays at the museum to commemorate the occupation, is the Haitian flag, now faded and barely recognizable, that President Sténio Vincent raised on Aug. 21, 1934 at the end of the occupation. Four years earlier, Vincent had won the presidential elections.

Haiti’s historians and writers have long debated the impact of the occupation. Despite some positives, like a stable economy, many say the occupation failed to bring about sustainable development or improve the lives of the rural poor.

“The American occupation was a failure,” said Herold Toussaint, a professor at the State University of Haiti. “There was stability of [the domestic currency] and they diminished corruption in the public administration. But the objective they had, friendly relations between Haiti and the U.S., didn’t happen.”

Instead of cooperation, there was domination, said Toussaint, noting that the soldiers accentuated the class and color issue in Haiti where lighter-skinned Haitians were rewarded with plum diplomatic posts, and the rural poor led an unsuccessful revolt.

The occupation would eventually end after the resistance became too much for the U.S. government and President Franklin D. Roosevelt’s administration.

On Tuesday, a small group of protesters observed the anniversary by marching to the U.S. Embassy.