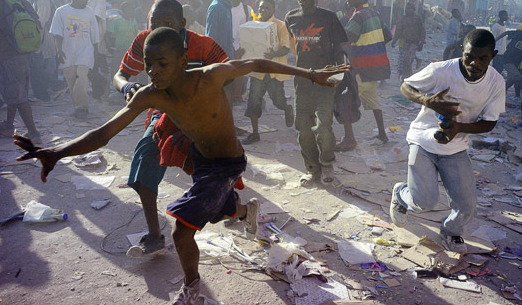 Haiti is in turmoil as the population struggles with the soaring cost of basics like food and fuel, a situation made worse by the unresolved and ongoing national debate about exactly who is responsible for rampant corruption and the misuse of state funds.
With more than half the country’s food and every drop of fuel imported, the historically low Haitian currency (the gourde) is making life unimaginably expensive at the moment. People are becoming desperate and their legitimate attempts at peaceful protest have in many cases been hijacked by lawless elements that are looting and inflicting damage to any vehicle, business or property that, in the heat of the moment, they take as a symbol of oppression.
There is also a longstanding form of public protest in Haiti in the form of roadblocks. These are normally peaceful in nature as a group will block their local road to raise awareness of one or other grievance, and possibly extract a small passage fee in support of the cause (but which all involved know lines the pockets of the protesters). Now roadblocks have become much more sinister and often involve burning tires and sporadic gunfire.
Just a few weeks ago my colleague Timote Georges and I were picking cotton with some of our farmers, joined by three representatives of the Timberland company. It was a joyful occasion that marked the return of cotton to Haiti after a 30-year absence. The Smallholder Farmers Alliance (SFA) has been buying this crop from our farmer members for the past month, but now more than half the harvest remains in the hands of farmers because the SFA had to close down our cotton purchasing center for the time being.
Port-au-Prince is like a ghost town. Schools, banks and businesses are closed. Hospitals are facing shortages of supplies. Most vehicles are off the road, leaving a smattering of motorcycles in place of the usual congestion. Each day brings news of violence in different parts of the country. Today, for example, Gonaives, near where we have our main operation, was experiencing violent riots and disruption. Tomorrow it will be a different city.

I am sharing this with you to give you some context for the images you are seeing in the media, but also to let you know that the SFA is undaunted by this current situation and will go the distance with our commitment to plant trees and improve agriculture in Haiti. We can’t predict how things will play out in the current political climate, but we can tell you we will be there through it all and in solidarity with the smallholder farmers of Haiti.